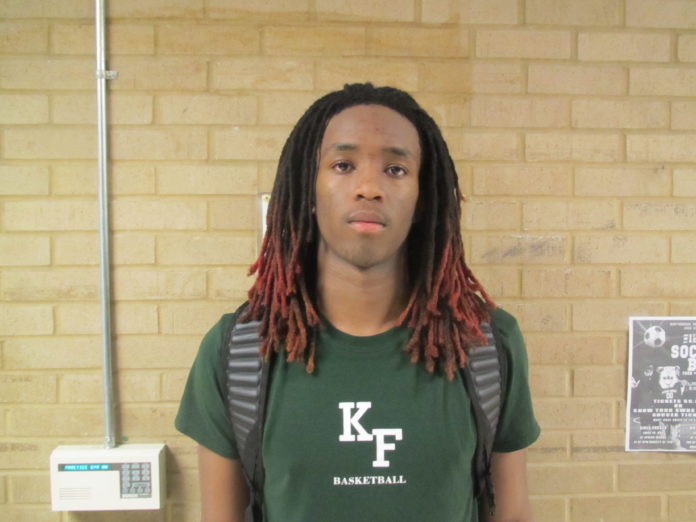 The best player on the top-ranked Class 6A boys’ team in Texas admitted as much following a Klein Forest 79-44 victory over host Spring Woods that improved the Eagles to 28-0 on the season and 12-0 in District 15-6A.

For the past six weeks of the 2016-2017 season, Klein Forest has occupied the No. 1 ranking in the Texas Association of Basketball Coaches (TABC) Class 6A state poll.

Alley, a 6-foot-6 senior post who scored a team-high 15 points against Spring Woods, was asked if he was ready for the regular season to cease and the playoffs to begin.

“I’m just enjoying the regular season right now,” he said. “We have two more games and that’s what we’re focused on. Our main goal is getting ready for our next game with Stratford.

“We did all right tonight (against Spring Woods). Our defense was slow at first so our offense was a little sluggish,” Alley said. “But when our defense set in during the second quarter everything started to flow and we went up big.”

With a 22-8 edge to begin the second stanza Klein Forest initiated the onslaught with a three-pointer by Kharee McDaniel. Alley followed with back-to-back steals that resulted in a one-man fastbreak for layups.

McDaniel nailed another trey, D’Angelo Smith scored on a putback, Taj Simmons drilled a 3-pointer while McDaniel and Alley combined to convert 3-of-4 free throws and take a 40-21 advantage to intermission.

Durey Cadwell and McDaniel finished with 14 points apiece. Cadwell had 11 in the fourth quarter.

“Spring Woods has some sophomores that can really play,” said Klein Forest head coach Cary Black. “They can really shoot it and I thought we did a good job of locking in on their key guys.

“My philosophy is to go out and try to win every game that we play,” Black said. “Do the best we can every single time and let the chips fall where they may. I don’t want to put pressure on these guys with the undefeated record and all that.”

Although Klein Forest resides in north Houston where many surrounding schools are positioned in Region III, once the playoffs begin the Eagles will compete in Region II, a route that has paid dividends for the Eagles in the past.

“We’ve had some good luck in Region II,” Black said. “In 2000 we made the state championship game and in 2008 we got to the state tournament. We don’t really know those teams so we just go out and play basketball.

“We play good as a team together. We’re not afraid to get down in the stance and guard. So that’s a pretty good formula,” Black said.

“Just go play, be yourself and do your thing. Things will work out the way they’re supposed to.”