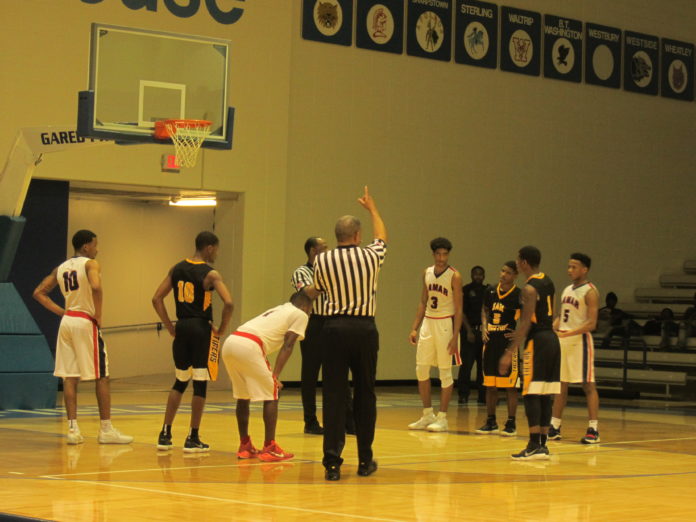 The Texans refused to back down.

Facing the unbeaten league leaders following a loss in the first matchup, the Lamar boys flourished in their roles as underdogs and went to-to-toe with state-ranked Sam Houston at Barnett Fieldhouse.

When the dust settled after the going got testy in the game’s waning moments, Lamar came away with a convincing 58-50 victory. Tamir Bynum and Rodric Burns led the way with 25 and 15 points, respectively.

“We cleaned up the rebounds and executed at the end of the game better than we have all season,” said Lamar head coach Jerry Van Dusen. “We forced some things at times, but we took a timeout and talked about it. We came back re-focused.

“We did a good job on their point guard Kendric Davis. It was old-fashion defense, stay in front of him, put a hand in his face and rebound the misses. He’s a great player, but we were able to force him to be a jump shooter and not let him get to the rim as much.”

Trailing 14-2 in the first quarter, Lamar finished off the stanza on an 11-0 run fueled by Rodric Burns (6 points), Bynum (2 points) and a 3-pointer by Dennis Sharp.

Lamar led 26-24 at halftime with Johnny Thomas and Koby Flowers contributing timely buckets. Myles Burns helped stake the Texans to a 40-36 advantage going into the fourth quarter. Thomas finished with 9 points and Myles Burns had 8.

Lamar improved to 16-9 and 3-3. The Texans are still alive in the quest for a playoff berth.