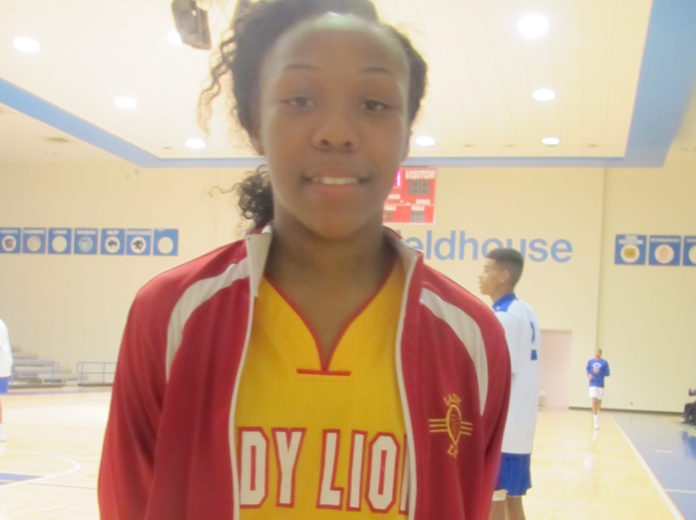 Malon Garner has a ticket to drive and a green light to get from one destination to another.

The Yates High School freshman point guard has her team on the road to the playoffs after making the transition from middle school star to high school stalwart.

“Malon normally drives the bus for us,” said Yates head coach Jun DeHorney. “She takes care of the ball, always plays great defense and can be depended on to make the right decision with the ball. She does very well for a freshman.”

In a recent 47-28 victory over North Forest that nailed down second place in District 11-4A, Garner scored six consecutive points in the second quarter to give the Lions some breathing room (21-9). To begin the third quarter she drilled a 3-pointer as Yates began to pull away (34-12) for good.

“Malon loves to shoot and she has not met a shot that she doesn’t like to take,” DeHorney said. “That’s just fine because she won’t hesitate to take a pressure shot.

“She’s one of those rare players who comes along every six or seven years,” DeHorney said. “We’re glad to have her at Yates High School.”

Garner and fellow freshman Annette Clark combine with juniors Chade Gladney, Brianna Cloud and Miya Crump along with senior Mya Banks to form the nucleus of the 2017 Yates’ varsity squad.

Crump scored a team-high 13 points against North Forest while Banks and Garner added 12 and 11, respectively.

Garner said the desire to succeed was instilled in her at an early age by family members and two well-known basketball icons.

“My whole family played basketball and while I was growing up I wanted to be one of those family members that go and travel and make it somewhere in life,” she said.

“I was always motivated by LeBron James and Brittney Griner of Baylor University as well,” Garner said. “That’s what got me started.”

DeHorney wasn’t sure if Garner would attend Yates following a stellar career at Cullen Middle School.

“I knew a lot of people were interested in her. She was well sought-after coming out of middle school,” he said. “When she did sign in at Yates I was very happy and that was the start of positive things for us.”

Garner said there was never any doubt in her mind where she would attend high school.

“A lot of different people talked to me, but I thought that Jack Yates would be the right place for me,” Garner said.

“It was kind of rough at first,” she said. “I had to get used to playing against bigger and stronger girls.

“Now when my team shuts down I know how to move the ball around and get us back on track,” Garner said.

How she relaxes – Dancing, singing