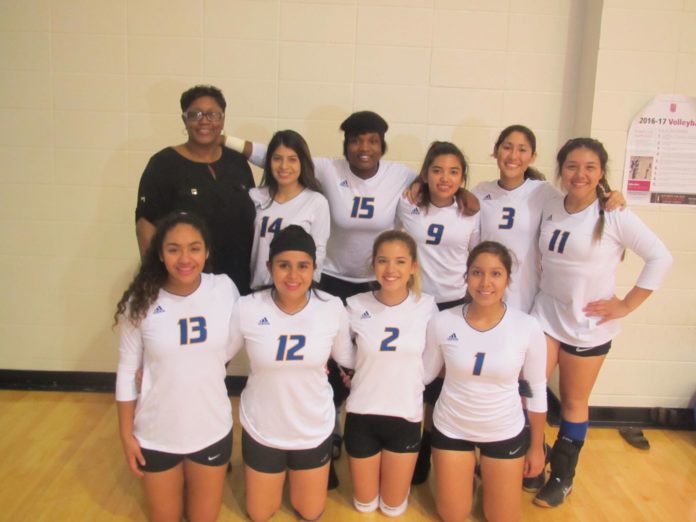 Karen Waddell received the ultimate salute from her team.

Not only did the Milby High School girls’ varsity volleyball team defeat Sterling 3-0 in District 24-5A action, but immediately following the contest, they serenaded the head coach with a rather loud rendition of “Happy Birthday” at Barnett Fieldhouse.

“We talked about it a little but I didn’t know what they were going to do,” Waddell said. “They said they had a little surprise for me, especially if we won.

“For them to burst out like that was very exciting,” Waddell said. “They are normally a quiet group so I wasn’t expecting it.”

The out-of-character demonstration by the Milby girls is reminiscent of the transformation the team is currently undergoing on the volleyball court.

“I have a lot of girls that are new to the varsity level,” said Waddell, who is in her first year at Milby after coaching at Sterling last season.

“It’s a different game from the sub-varsity level and they’re getting acclimated to new roles and new positions on the court,” Waddell said.

Outside hitter Samantha Tamez and setter Ashley McNeil are experienced returnees from last year’s squad. “Those two are really holding the team together,” Waddell said.

The victory over Sterling improves Milby to 2-3 in district play.

“We’re playing together and starting to jell as a team,” Waddell said. “At first we weren’t communicating as a team. But the communication has become much more effective now.

“It’s tough on us right now. We’ve got three district losses but we’re getting better each game,” Waddell said. “We still have a lot of room for improvement, and by the second half of district play, all the teams will be improved. Yet I still think we can be a contender for a playoff spot.”

Waddell lists Austin, Waltrip and Sharpstown as other contenders in the district race. Davis, Furr, Lee and Madison round out the eight-school district lineup.

Trying to coach a squad into the postseason wasn’t on the radar for Waddell following the 2015 season. She had contemplated taking a year off from coaching for personal reasons. Then an unforeseen opportunity came knocking on her door.

“I teach at Jones High School and the Milby students are currently in the same building,” Waddell said. “I was approached a couple of times and they said they really needed a coach. I thought it might work so I took the job.”

The Milby volleyball team is on the rise because of that decision.