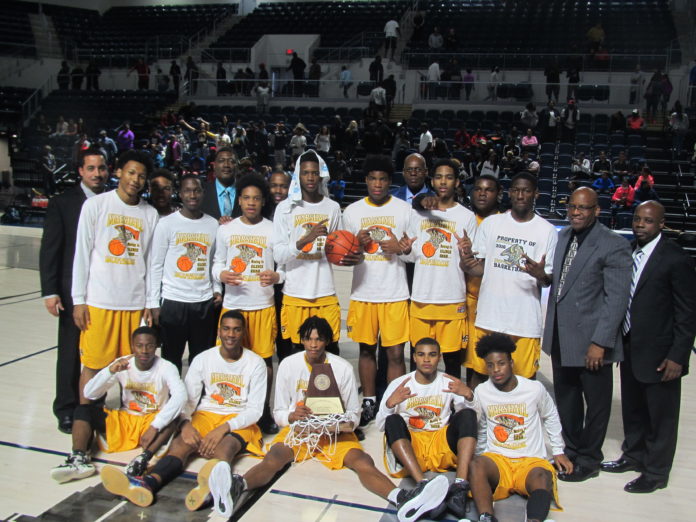 No task is too daunting for the Thurgood Marshall High School boys’ varsity basketball team: Not facing the No. 1 ranked Class 5A team in Texas (Waco University) in the regional semifinal. Not facing a district rival (Manvel) that had beaten them once in two earlier meetings in the regional final.

How about making the school’s first appearance in the boys’ state basketball tournament?

“We don’t worry about rankings because at one point we were ranked No. 1 and somebody knocked us off,” said Marshall leading scorer Jabari Rice. “We just want to go into each matchup and play our game.”

In the Region III-5A tournament held at the brand new Delmar Fieldhouse, Marshall parlayed big third-quarter explosions in both games to win going away.

Behind a strong start from Walker (eight first-quarter points) Marshall led top-ranked University 24-21 after the opening stanza and stretched that to 52-39 at intermission.

“Coming into the game I anticipated having to go hard at their big man and fortunately I had a good game,” said Walker, who registered a game-high 32 points in 26 minutes.

Then the Buffalos kicked it into high gear with four consecutive 3-pointers (three by Rice and one by Sherman) midway through the third quarter that opened the floodgates (69-51).

“Conditioning was a factor and we consider ourselves one of the best conditioned teams around,” said Marshall head coach Gary W. Nichols. “I thought that was a key in this game.

“We were still fresh and running while our opponents were bent over with hands on their knees,” Nichols said. “When our guys see that we know it’s time to take it up a notch.”

Rice finished with 22 points (four 3-pointers) and Sherman had 17 (two treys). Christy chipped in with 11 points.

“We’re both good shooters and we like to compete,” said Sherman, about teammate Rice. “We push each other in practice all the time. When he got on a roll, I knew I had to make mine or we weren’t going to hear the end of it.”

Manvel led Marshall 26-25 at halftime of the regional championship game.

Yet Marshall outscored Manvel 23-12 in the third quarter on the strength of four 3-pointers by Rice and another by Walker.

Jalen Preston (23 points, six rebounds) tried to keep the Mavericks afloat, but the Mavericks were unable to harness the Marshall stampede (82-57).

Rice had a game-high 25 points (four 3-pointers) for Marshall and Walker contributed 19 points, 11 rebounds and two blocked shots. Wyche scored 10 of his 13 points in the fourth quarter.

“We’ve been waiting all season for this,” Rice said. “People have doubted us and now they have nothing to say.”

Nichols, who guided Willowridge to a state title in 1994, is happy to be returning to the big dance.

“It’s been a long time since I’ve been there,” he said. “I’m excited and proud for my players because they get a chance to experience something that they’ll never forget in their lifetimes.”

Marshall (31-7) faces Justin Northwest (32-5) in a Class 5A state semifinal. Corpus Christi Veterans Memorial draws Mansfield Timberview in the other 5A semifinal.