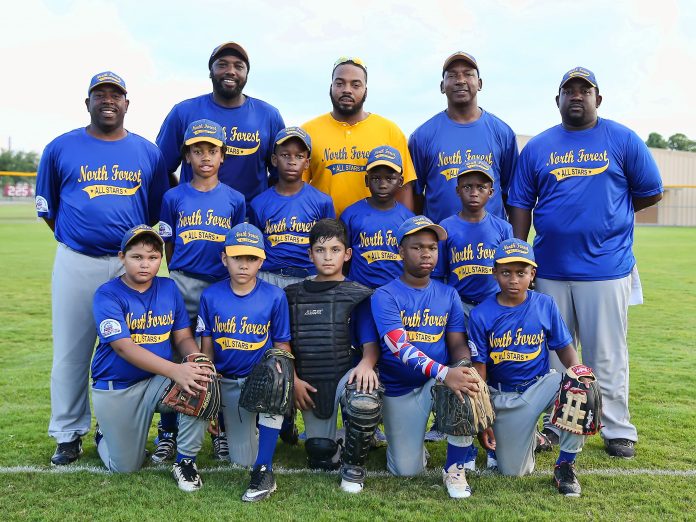 Members of the North Forest All-Stars Little League baseball team have been on fire this season as they moved on round after round with an incredible run and won their age group’s regional, sections, district and directors’ tournaments.

In the South Zone 9 U Pony Tournament where teams from across the state competed for a trip to the 2019 Little League World Series in August, the All-Stars bounced back after a 9-5 loss to Laredo. In the next game, the All-Stars blew out their opponent 20-4 behind two in-the-park home runs by Demetries Joulbert.

“The only way I got the two runs was I held the bat back and as soon as the ball came I swung and my hips turned and the ball just went into the outfield,” Joulbert said.

Against all odds, the All-Stars, the only predominantly African-American team in a field of teams from larger regions across the state, secured a spot in the final with a 3-1 record, just one game away from a punched ticket to the Little League World Series.

In the final game, the All-Stars were defeated by La Porte 15-4 in four innings of play, but their progress was an achievement in itself.

The Defender spoke with the North Forest All-Stars head coach Teddy Resby about their keys to success and how the game has helped the kids grow.

Defender: What have been the keys to in your Little League tournament play?

Resby:Right now, all of our bats are clicking which is a really good thing. In these previous games there hasn’t really been that much competition. The game that really made us turn things around was the Laredo game because we lost to a team that we shouldn’t have lost to. Normally we would blow that team out by 15 points or more. After that game our team was much more focused.

Defender: How has baseball helped your players mature?

Resby:Our kids are in love with baseball. Some of the kids just play for fun and the parents just put their kids in to participate. But on this team, they are focused on baseball and want to play all year around even though we don’t offer that at our park yet. Just the mentality of these kids makes it really easy for us to coach them because they live baseball. If the coaches are late to practice they are already practicing, warming up and doing things they know they should do and once we start rolling in practicing everyone is focused. They’re focused on being baseball players and having one concept of coming together to win.