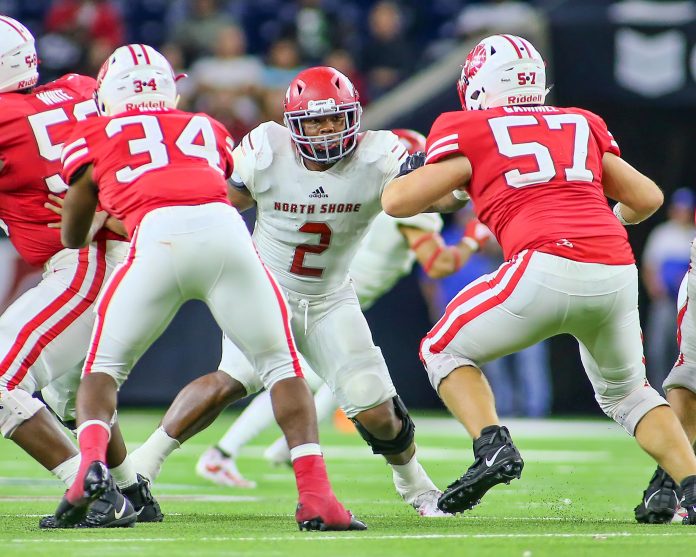 Last season, North Shore High School middle linebacker Corey Flagg Jr. played a key defensive role as a starter in the Mustangs title run. As this season has breezed by Flagg is doing even more as a playmaker on the defensive side of the ball.

In addition to Flagg’s ability to be everywhere on the field, his knack for rallying the troops when need be and getting that bit of extra push is what really sets him apart.

“He understands what we want to do defensively,” Kay said. “He can make adjustments. He can talk to people on the sideline when we are struggling.

“…When I’m not communicating with a kid, he can speak with them to make that kind of impact. He’s a real coach on the sideline and he’s the type of player you want to build your defense around.”

The Defender spoke with Flagg about his style of play and leadership and the defense’s keys to success against Katy.

Defender: How would you describe your style of play as an inside linebacker?

Flagg: I [try to play like pros] Bobby Wagner, Devin White, Jaylen Smith and Ryan Shazier. There are a lot of guys that I like and I pick up information watching them.”

Defender: What would you say were the key to success in a getting a win when it mattered against Katy in the playoffs?

Flagg:Just executing and doing our jobs by staying in our gaps.

Defender: Moving on to the next round, what does that mean to you?

Flagg:It’s definitely a blessing so let me give all glory to God because it is a huge blessing. We put in work day in and day out.

Defender: Describe your journey as a leader on this championship level defense?

Flagg:I have great teammates and great coaches so [it’s not] that hard for me.