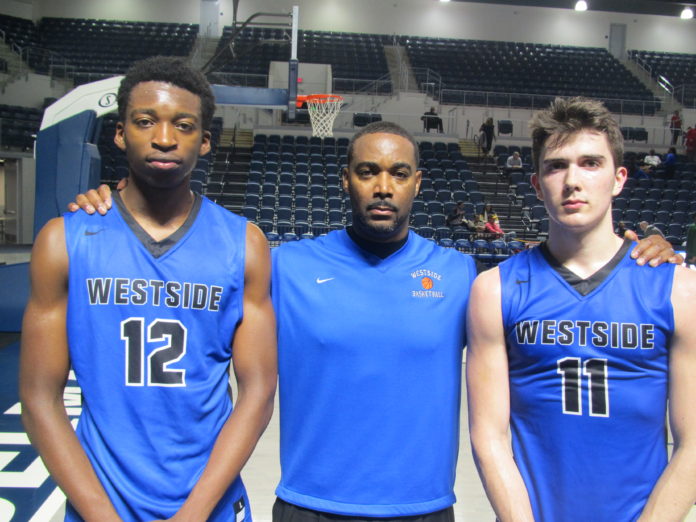 With the girls already steamrolling toward a regional tournament, the boys’ division will open the postseason with their eyes on the big prize.

Westside High School head boys’ basketball coach Deon Williams has guided his team to two tournament titles during the 2017-18 season, including the McDonald’s Classic and the HISD Tournament.

The Wolves clinched the No. 2 seed out of District 18-6A with a 57-51 win over Bellaire in the final game of the regular season and will open the playoffs on a high.

“We know this is a tough region,” Williams said. “Just in our own district Sam Houston, Lamar and Bellaire are all good teams. We know Fort Bend Bush will always be around. The Cypress and Katy districts have good teams as well.

“This is the type of win we have to build on because it’s going to be a grind just getting to the regional tournament,” said Williams, whose team finished the regular season 26-6. “If you can compete well in this region it will put you in a position to get to the state tournament. I think we’re up for the task.”

After losing to Bellaire in the first half of league play, Westside was able to handle the Cardinals in the rematch despite only nine points from leading scorer and co-captain Abdul Alatishe.

“We struggled beating the press early in the season and in our first meeting with Bellaire,” VanBeck said. “That’s been a point of emphasis recently in practice. Working on our press breaks and everyone getting organized and making the right decisions. We executed well in this game.

“In the two tournaments that we won, we hadn’t done well in past years,” VanBeck said. “This is the best start to a season that I’ve seen at Westside. We won our first 11 games of the season and that allowed us to set our goals high for district and for state.”

Williams is counting on more big contributions from VanBeck and Ezekwesili with the postseason set to begin.

“Neil is one of the most versatile players that we have,” Williams said. “He can do it all. He was in this game to win it and he showed that from the very beginning all the way to the end.

“Obi [short for Chimaobi] is a tough competitor,” Williams said. “He plays the five position for us and does a great job on the boards and with his defense.”

This is the time of the season that both players have been anticipating.

“I always have to rebound and play great help defense,” Ezekwesili said. “It’s a big responsibility and everybody else has to step up and play their roles as well.

“Whenever my teammates are playing well it gives me the energy and motivation to play well,” Ezekwesili said. “I’m ready to work hard and get ready for the playoffs.

“This is going to be fun because it will be the first time that I’ll be starting in a playoff game.”