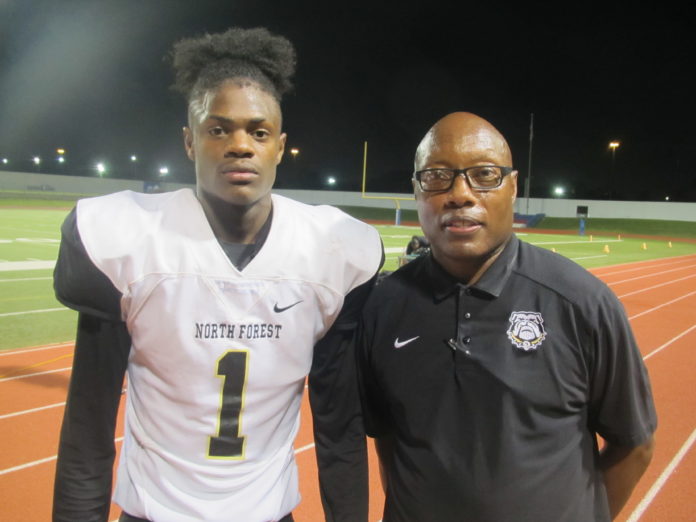 “When we’re in a bind and need a big play, we turn to No. 1,” Terrell said following a 44-21 triumph over Wheatley High School at Barnett Stadium. “That’s our man right there.

“He’s leading the district in touchdowns because he can make big plays. He’s definitely our playmaker,” Terrell said.

Unbeaten North Forest found itself involved in an old-fashioned dogfight when Wheatley took a 21-14 advantage with just under two minutes remaining in the second quarter.

Demas opened the game’s scoring with a 10-yard TD reception from quarterback Kevion Cornett at the 9:45 mark of the first quarter. Aleric Manuel hauled in a 29-yard TD aerial from Cornett to give the Bulldogs a two-score lead (14-0).

Yet Wheatley rattled off three unanswered touchdowns to seize the game’s momentum and the bad news didn’t stop there for North Forest.

Starting tailback Damond Wiggins was injured in the first half and didn’t play the remainder of the game.

With less than one minute to play in the first half North Forest faced a fourth-and-13 at their 28 and lined up in punt formation. Demas also serves as the team’s punter.

Demas fielded a high snap from center and saw a Wheatley player within close proximity. The sophomore eluded the defender and took off on a 72-yard foray downfield for a touchdown.

“It was not a called play. I just looked up and reacted,” Demas said. “Speed has always been a big part of my game.”

The teams went in for intermission forged in a 21-21 tie.

“Our defense stepped up in the second half also,” Terrell said. “We made some adjustments and got on them. They shut them down after that.”

Demas finished with four catches for 42 yards and two scores. He rushed for 93 yards on three carries, including the 72-yard momentum changer right before halftime.

“When my teammate went down I had to step up and do my job in any way that I could,” Demas said. “My teammates and I were able to fight hard and come home with a ‘W.’ ”

North Forest will conclude the regular season against Worthing.

“They [Worthing)] will play us hard because a win over us will give them a share of the district title,” Terrell said. “Worthing and Yates only have one loss in district so if they beat us, there will be a three-way tie.

“We’ve tried to put this team together for success in the postseason,” Terrell said. “You have to be able to stop the run in the playoffs and we want to be playing after Thanksgiving.”