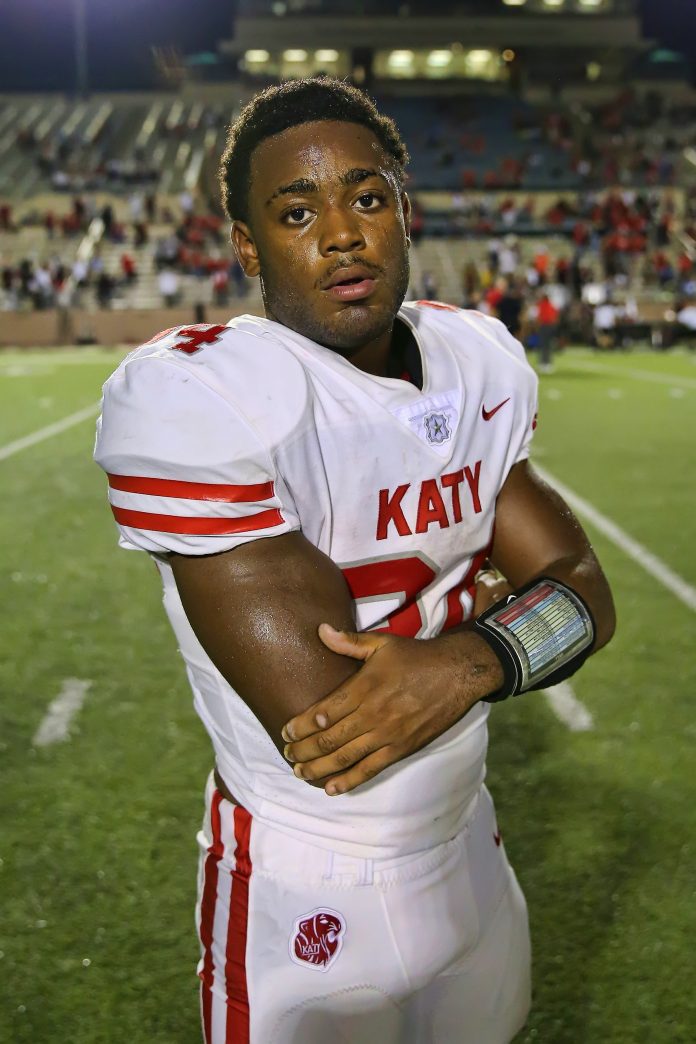 Ronald Hoff, a Katy High School senior transfer running back from Charlotte, N.C., is a smashmouth, north and south runner who has the breakaway speed necessary to hit the corner and take off for a long run.

In the 24-21 season opener victory over defending Class 6A Division I state champion North Shore, Hoff ran 206 yards on 32 touches with a key touchdown that sparked a momentum- shifting third quarter after Katy trailed by 21-17 at halftime.

Katy grounded and pounded their new addition throughout the game as Hoff inched the Tigers up the field with each carry, effectively setting up the play action pass which reeled in two additional touchdowns that wide receiver Jordan Patrick fully admitted was a direct result of a successful running game.

This season, Katy is without standout running back Deondrick Glass, who signed with Oklahoma State University. Katy head football coach Gary Joseph shared what impressed him about the team’s reloaded running attack with Hoff at the forefront.

“He plays hard, he gets at least 3 or 4 yards a carry, helps control the clock a little bit and I am just impressed with his game tonight,” Joseph said.

The Defender spoke with Hoff after the season opener against North Shore to discuss his transfer to Houston, his momentum-shifting touchdown run and advice to others who want to follow in his footsteps.

Defender: How would you describe the journey that brought you to Katy?

Hoff:It was my senior year and I have seen the backs that have come from this school and the amazing work that these coaches do for them. So, my [journey involved] coming here and doing my part, getting right, coming to spring ball doing my job, and beating the team that just won the state championship. This is awesome and God is just so good.

Defender: How would you describe your style of play as a running back?

Hoff:I’m a north and south runner. It’s just me moving forward, leaning my shoulders and getting more yards a carry.

Defender: Describe the touchdown you scored against North Shore.

Hoff:On the pitch play it was wide open. The corner was sucking in and it was just wide open. My blocking was amazing and God was just so good. He blessed me to do what I did for this team to get this win today.

Defender: What excites you the most about playing high school football in Texas?

Hoff:They say Texas football is the best. So, me coming out here doing my best at what God blessed me to do is just amazing and I’m just going to keep doing it for these boys because they want to win as bad as I do.

Defender: What advice do you have for young players who want achieve the success you have had so far?

Hoff:Keep pushing, practicing, and in practice always go full speed because the game is even faster with game speed. Keep going fast and do your part for your team then everything will work out.