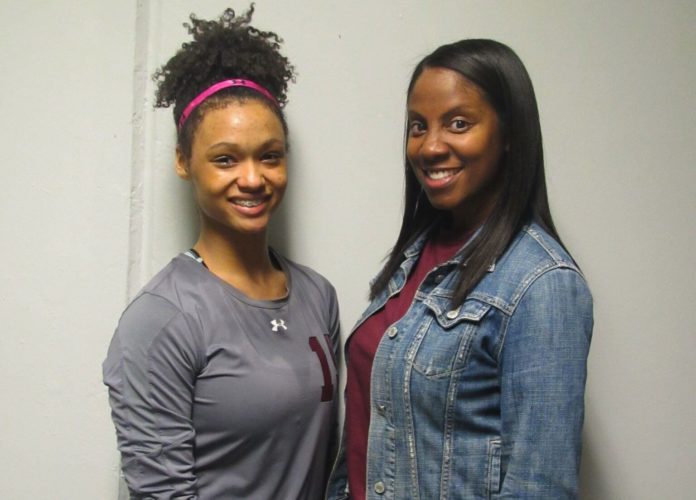 Whenever the Heights High School varsity volleyball team is on the court, the eyes of onlookers invariably are drawn to her. She’s tall, lean, athletic, graceful and possesses a remarkable all-around floor game.

A senior that is equally adept at the net as she is on the back row, Pappillion came into the 2016 girls’ high school volleyball season with a modest list of expectations.

“I wanted our team to make it as far as we can,” she said. “Individually, I wanted to get better, play hard and improve so hopefully I can get recruited and go to college.”

Pappillion came about her athleticism honestly.

She has two aunts that played in the WNBA women’s professional basketball league, but admits to being the first in her family that has pursued volleyball.

“I kind of went off tradition with volleyball, but I do have a very athletic family,” Pappillion said.

“My best friend in seventh grade played volleyball and I had never played before,” she said. “She encouraged me to play and after that I fell in love with it.”

Primarily an outside hitter with her club team, Pappillion plays every position on the floor for her high school team.

Heights (formerly Reagan High School) advanced to the finals of the HISD Tournament during the season’s early stages.

With a five-set win over Chavez at Barnett Fieldhouse last week, the Lady Bulldogs forged a playoff play-in match against Carnegie, the same opponent they faced in the HISD Tournament championship match.

The winner joins Bellaire, Westside and Lamar as District 18-6A postseason qualifiers.

“This season has gone really well, a lot better than I expected.  We’ve been improving as a team day-by-day,” Pappillion said. “I think it’s amazing how far we’ve come.”

Pappillion is a four-year varsity letter winner that has earned all-district honors following each season. She admires members of the Penn State University women’s volleyball team because in her words “they are amazing.” Pappillion is also a pre-AP student in the classroom.

This is the first full season Pappillion has played for head coach Chelsea Lewis. Yet Lewis has observed Pappillion throughout her high school career while serving in other capacities at the school.

“Skylon is a phenomenal hitter. If she calls for the ball and you give it to her, it’s pretty much going down for a winner,” Lewis said. “She knows how to go across court, she knows how to go down the lines and she’s very explosive.

“When she came in the gym as a freshman, me and the other coaches said whoa,” Lewis said. “She can jump, she can hit and over the years she’s just gotten bigger, stronger and better.”

Despite missing a key player against Chavez, Lewis says her team has learned how to persevere through tough times.

“When we play as a team we know how to fight through adversity,” she said. “My seniors stepped up in the last game when they needed to.”

Which three HISD football teams have a shot at going undefeated?