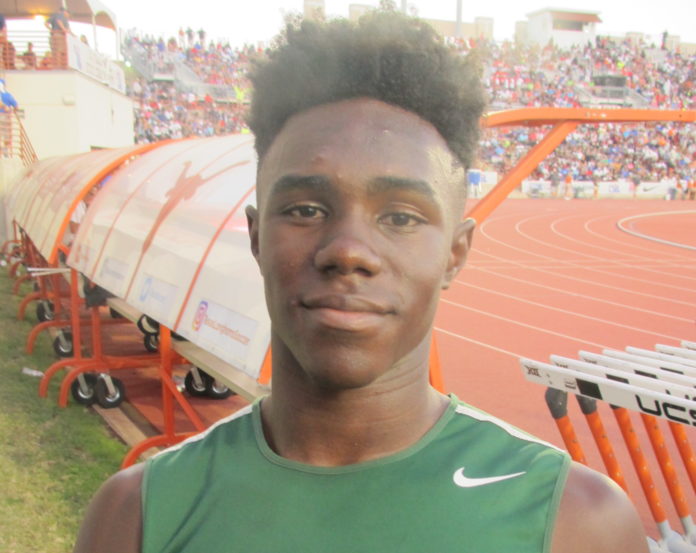 Kesean Carter may have surprised everyone but himself.

A two-sport star in both football and track at The Woodlands High School, Carter was a starting wide receiver and a pivotal figure in the Highlanders’ march to the Class 6A Division I state title game last December.

Carter saved the most impressive performance of his junior year for the 2017 spring UIL Class 6A state track and field championships at Mike A. Myers Stadium in Austin.

In back-to-back events beginning with the boys’ 100-meter dash and continuing in the 4X200 meter relay, Carter was simply scintillating.

The top four finishers in the 100-meter dash all hailed from the Gulf Coast region, led by Carter who easily won the race in a time of 10.32 seconds to take home the gold medal.

What followed came as a surprise to nearly everyone except Carter.

Converse Judson was the favorite to win the Class 6A boys’ 4X200 meter relay with the best qualifying time of just under one minute, 25 seconds.

Yet it was The Woodlands that won gold with a school and Class 6A meet record time of one minute, 23.81 seconds. Ethan Bonner, Jacob Barrett and Jake Lanier gave their anchor man (Carter) a lead he refused to surrender.

“I’m very proud of the way we competed today,” Carter said. “We came to the Texas Relays just to get the experience of running on this track against quality competition.

“It feels great to put the work in after the Texas Relays and see it pay off. We put it all together during the district, area and regional rounds. We came to state and proved why we should be No. 1,” Carter said. “We continued to improve. That’s all I can say.”

William Hunsdale’s fifth-place finish in the 3,200 meter run gave the Highlanders an insurmountable 60 team points midway through the running finals and the eventual Class 6A boys’ team title. George Ranch (54) was the runner-up.

“This is the best high school track and field meet in the country,” Green said. “I didn’t really think we had a chance to win it. I thought we had a chance to finish near the top if we executed to near perfection. We weren’t shell-shocked.

“After Kesean won the 100-meter dash, we started doing the math and that’s when we knew we had a shot at winning this thing,” Green said. “Winning the 4X200 relay put us in a good spot.”