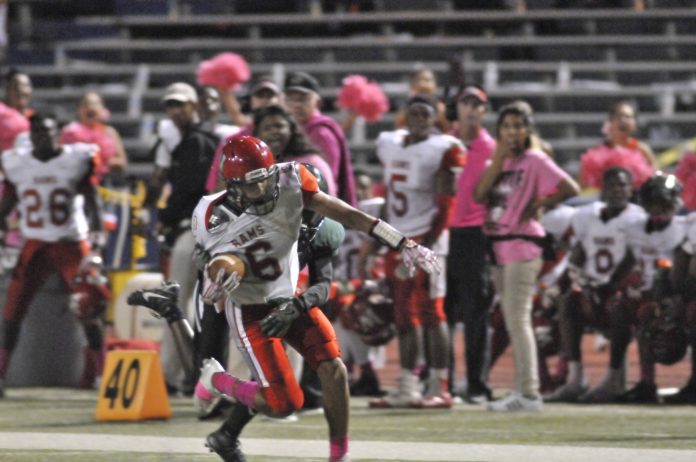 Houston’s Stephen F. Austin was riding the crest of an early-season winning streak that produced a 5-1 record and a Top 10 Houston area Class 5A ranking for the first time in more than 30 years.

The Waltrip Rams were not impressed.

With playoff seeding in District 24-5A at stake, Waltrip ran off 34 unanswered points to start the game en route to a 48-14 victory at Barnett Stadium that dealt SFA its first loss in league play.

After recovering a fumble at the Austin 20-yard line, Waltrip utilized trickery to score on its first play from scrimmage.

Normal starting quarterback Brantley Williams Jr. lined up at receiver and going on a quick count that seemed to catch the Austin defense off guard, Samuel Lemond threw a 20-yard touchdown pass to a wide-open Williams.

The snap was mishandled on the conversion attempt and Waltrip led 6-0 with nine minutes, 24 seconds remaining in the first quarter. That was perhaps the only mishap of the game for the Rams.

Williams completed touchdown passes of 31 yards to Orvis Fowler and seven yards to Jordan Washington sandwiched around a 19-yard TD run by Sean Goodman in the second quarter to take a 27-0 advantage into intermission.

Austin showed signs of life trailing 34-0 in the fourth quarter when Emanuel Fisher scored on a one-yard run and Melvin Taylor returned a punt 48 yards for another score.

Madison sits atop the District 24-5A standings with Waltrip, Austin, Sterling and Sharpstown in hot pursuit.

In case you missed it, watch this weeks episode of Gimme-A-Minute in Defender Sports below: