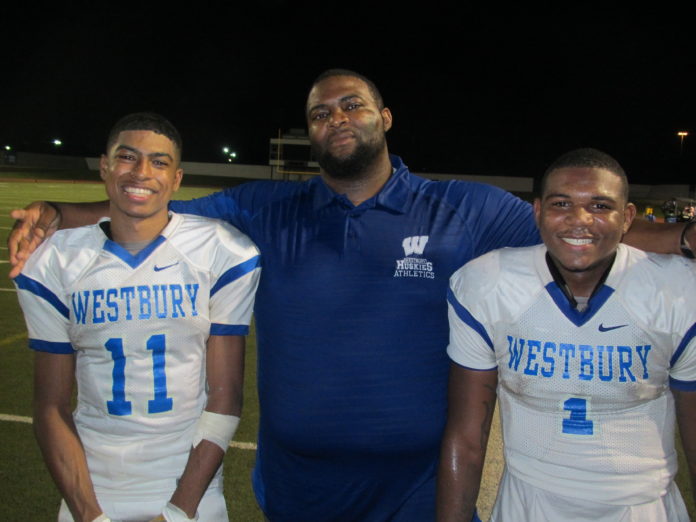 The Westbury Huskies have big-play capabilities.

In a 28-14 victory over Chavez at Barnett Stadium, all four Westbury touchdowns were scored from better than 35 yards out.

Trailing 6-0 with a little more than seven minutes remaining in the first quarter, Diop Dorsey took the ensuing kickoff and burst through a wave of defenders to even the score with a 60-yard sprint to the end zone.

Luis Gonzalez kicked the first of his four extra points in the contest to give the Huskies a lead (7-6) they would never relinquish .

The warp-speed score jump-started the Westbury offense. With less than 60

Diop Dorsey took the ensuing kickoff and burst through a wave of defenders to even the score with a 60-yard sprint to the end zone.

Luis Gonzalez kicked the first of his four extra points in the contest to give the Huskies a lead (7-6) they would never relinquish .

The warp-speed score jump-started the Westbury offense. With less than 60 seconds remaining in the opening quarter Westbury quarterback Oshea Clement found a seam up the middle of the field and raced to a 35-yard TD run.

Westbury secured its first victory of the season and evened its District 18-6A ledger at 1-1 with two long scoring plays in the third quarter.

Justin Hines hauled in an 80-yard touchdown pass from Clement at the 9:51 mark. The same duo combined on a 57-yard scoring connection with 4:21 left in the third stanza.

“We stepped up and made big plays,” said Westbury head coach Greg Wilson. “Each week we’re getting a lot better. These guys are buying into the things it takes to be a successful program.

“It’s showing on the field. Those plays are just a bi-product of their hard work throughout the week,” Wilson said. “We’re benefitting from film study. The kids are taking the time to learn what it is we need to do in order to exploit our opponents’ weaknesses.”

Clement generated just under 300 yards total offense (292) with 70 rushing yards on 10 carries and 222 passing yards on 9-of-15 passing with no interceptions.

“His versatility is a key. He’s played every position on the football field and he’s smart,” Wilson said. “He understands the things we’re trying to accomplish as an offense.”

Hines finished the game with four receptions for 163 yards and two touchdowns.

“Justin has big-play ability. He can take a five-yard pass and turn it into an 85-yard score,” Wilson said. “He’s a threat from anywhere on the field.”

Westbury remains in the hunt for one of four playoff berths in District 18-6A. The district includes defending champion Lamar, Heights, Bellaire, Chavez, Sam Houston and Westside.

The Huskies will face Heights, Sam Houston and Bellaire in the next three weeks while trying to remain in postseason consideration.

Clement is settling into a new position after playing defensive back and running back in the past.

“It’s a big task and I’m still learning the position,” he said. “My toughness is my biggest strength and my o-line did a great job for us. Without them we couldn’t do anything.”

Hines is gaining confidence coming off his best game of the season.

“I was just trying to get open and be smart with what I wanted to accomplish,” he said. “Your mindset has to be focused on what you want to do.

“We are student-athletes but we’re students first,” Hines said. “We have to go hard in the classroom and keep the grades up. Then we can go hard on the field.”