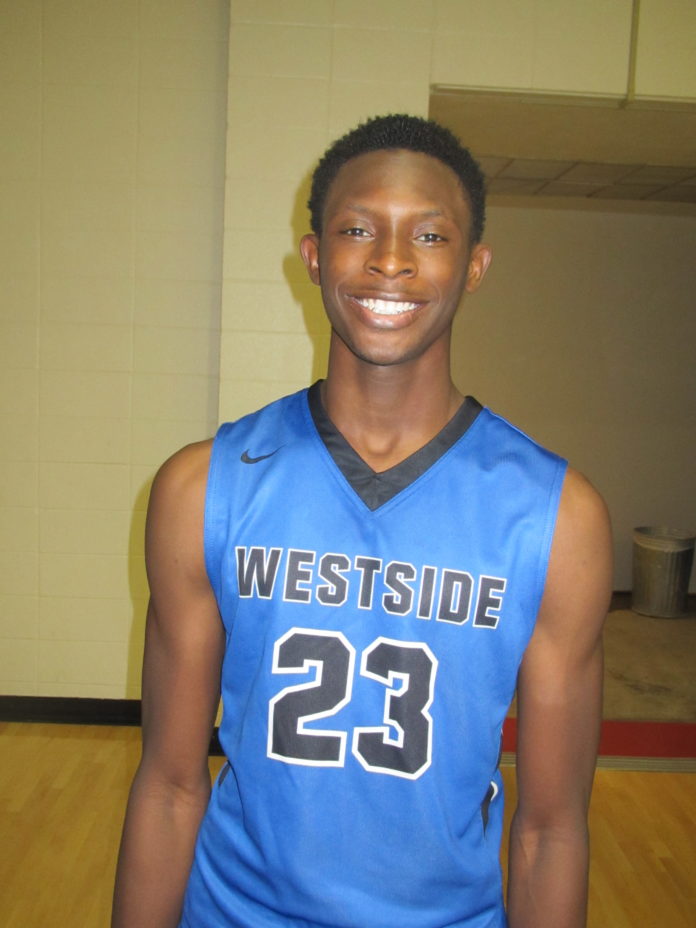 Abdul Alatishe is finding his place among the stars.

The Westside High School senior is gaining momentum in the recruiting circles according to head coach Deon Williams as colleges in Texas (UT-Tyler, Texas State) and as far away as Oklahoma (Southern Nazarene) are showing interest in the 6-foot-6 post player.

“We’re winding down in the district race and we really feel like we have a good chance to make a big push in the playoffs because we have Abdul,” Williams said. “He’s been our leading scorer and provides highlight after highlight to energize and make our team better.

“He brings stability in the paint and he’s a very versatile player,” Williams said. “He can guard positions one through five. He can handle the ball. He can shoot it and rebound. He’s one of those guys that can do everything we ask him to do.”

Westside improved to 21-4 on the season and 7-2 in District 18-6A with a 94-49 victory over Chavez at Barnett Fieldhouse. Alatishe finished with 18 points, including two monster dunks, despite sitting out the fourth quarter.

“My goals coming into my senior year were making it deep into the playoffs and putting Westside on the map,” Alatishe said.

Westside raised eyebrows early in the season by winning the prestigious McDonald’s Classic in Pasadena and the HISD Boys Tournament. Alatishe was selected to the all-tournament team in both events.

“Right now, winning those tournaments has been the highlight of our season so far,” Alatishe said. “It helped our confidence as a team to try and win every game, It’s the reason we have the record that we have.

“I think our best bet in the district race is second place, but if there’s any way we can finish first, we’re going for it,” Alatishe said.

Sam Houston is currently atop the District 18-6A standings while Westside and Bellaire are neck-and-neck for the runner-up spot. Lamar is also in the running for a playoff berth.

Alatishe transferred to Westside from a local prep school following his sophomore year. This is his second year playing for the Wolves and he’s one of the team captains.

“Honestly, it means everything to be a captain. I know the other guys are looking up to me to lead us to a victory every night,” he said.

“I love playing for Coach Will. He lets me play loose and at the same time lets everybody gets touches and have the opportunity to play their game,” he said.

Alatishe has turned out to be a welcome addition to the Westside boys’ basketball program.

“He’s a very good locker room guy so I love having him around,” Williams said. “His teammates love him and I can’t imagine where we’d be without him.”

World problem he would solve – Hunger