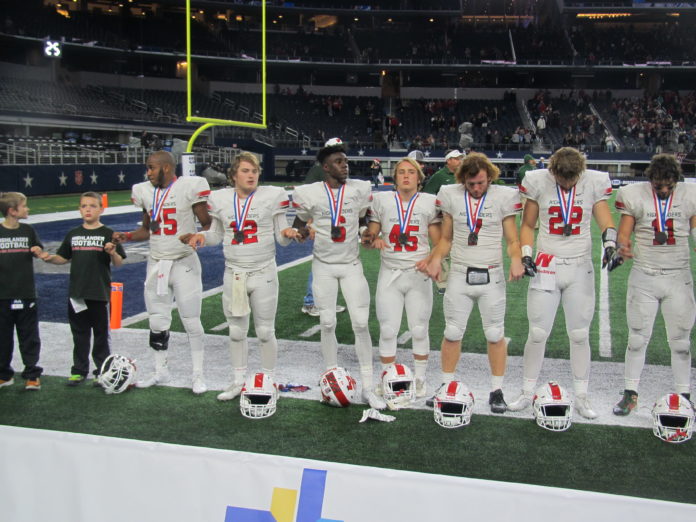 It was a unique perspective provided by a coach who had experienced a gamut of emotions over the course of a six-game playoff ride that ended in the Class 6A Division I state championship game.

The Woodlands earned the praise and support of nearly the entire high school football community in Texas while winning its first 15 games of the 2016 season, upsetting No. 1-ranked Allen 36-28 in the state semifinals and overcoming the loss of injured linebacker Grant Milton in the regional semifinals.

Yet when time expired following a 41-13 loss to Lake Travis at AT&T Stadium, there was no doubting the reality of the moment.

“There was really no loser today, but when you do lose you walk off the field feeling a little bit different than they (Lake Travis) feel,” said The Woodlands head coach Mark Schmid. “Lake Travis is a very good football team. They played better than we did today and they deserved to win.

“These kids (The Woodlands) did a great job all year long,” said Schmid, who played on the school’s first varsity team and whose son Eric was the quarterback of this year’s team. “They built momentum each and every week and dealt with a huge amount of adversity.

“Grant wasn’t here tonight but he was always in our hearts and in our minds,” Schmid said. “We wanted nothing more than to give him a victory tonight but we weren’t able to do that.”

Grant Milton remains hospitalized at a medical facility in The Woodlands following 17 days in a Waco hospital after emergency brain surgery.

The 15-1 Highlanders ran up against a Lake Travis team that came out of the gate running on all cylinders and scoring touchdowns on four of its first five offensive possessions of the game to take a 27-0 lead with nine minutes, 16 seconds left in the second quarter.

“Their defense was all over the place and they’re a great football team that made a lot of plays,” said Eric Schmid, who completed 17-of-27 passes for 140 yards with two touchdown passes and two interceptions. “We didn’t execute the way we needed to and they punched us in the mouth from the start and we never recovered.

“We could have played a lot better but we weren’t ready,” Eric Schmid said. “They were able to do their thing.”

Following a 20-point opening quarter Lake Travis (15-1) tacked on an additional touchdown in each of the following three quarters.

Dylan Casey hauled in a 30-yard TD reception from Eric Schmid in the second quarter (1:42 mark) while Connor Patrick concluded the game’s scoring with a nine-yard TD pass from Schmid with six seconds remaining in the fourth stanza for the Highlanders.

Senior linebacker Aidan Estrada of Lake Travis was named the game’s defensive MVP with seven tackles and an interception.

The Woodlands was making its second appearance in a state title game and first since 2003.

“We have an incredible football team,” Mark Schmid said. “With what we accomplished over 16 weeks, this team will go down among the best in Highlanders’ history.”