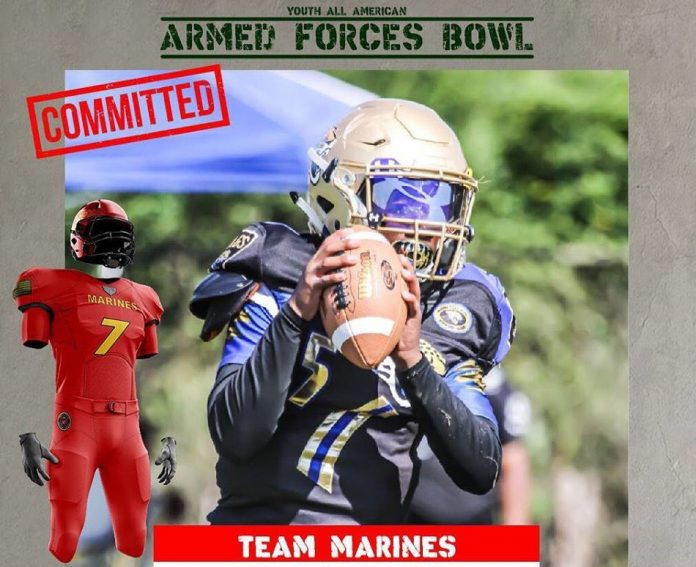 Wyndell Mitchell Jr., an incoming ninth-grade quarterback for Galena Park North Shore, scored for the Marine team at the Youth All American Armed Forces Bowl at Rice Stadium in a 21-12 victory over Navy.

In the game, Mitchell was able to make plays on the ground and in the air with a 27-yard touchdown pass on the run that put his team up 15-6. (The game was cut short when an injured Marine player was carted off the field in an ambulance).

Marine All-Star coach ______ explained what makes Mitchell such a special talent. “He can extend plays with his feet, he understands reads and he is not scared to maneuver around in the pocket,” he said.

“And what makes him special moving forward is that he understands the importance of extending plays and throughout the scramble process he still keeps his eyes down the field to make a play.”

The Defender spoke with Mitchell after the All-Star game to discuss his style of play, the touchdown he threw and how he is looking forward to joining the defending state championship North Shore High School football program this fall.

Mitchell:I am a dual-threat quarterback because I scramble to throw the ball and get touchdowns. You see me running but I want to be a pocket passer and an athlete who just wants to get it out there.

Defender: Describe the 27-yard touchdown pass you threw that put your team up two scores?

Mitchell:I wanted to attract the cornerback to come down to me and he did that so I just threw it over the top. My receiver and I already had chemistry because he goes to North Shore too. So, I told him pre-snap if they come down on me, I have to get it out and I did.

Defender: What are you looking forward to learning as you enter into a state championship-caliber program like North Shore?

Mitchell:I’ve been over there for just a year and I already see we don’t really run the ball as much but when run the ball we run it downhill. And throwing the ball we just spread it and you have to stop us. The quarterback makes the read and game over.