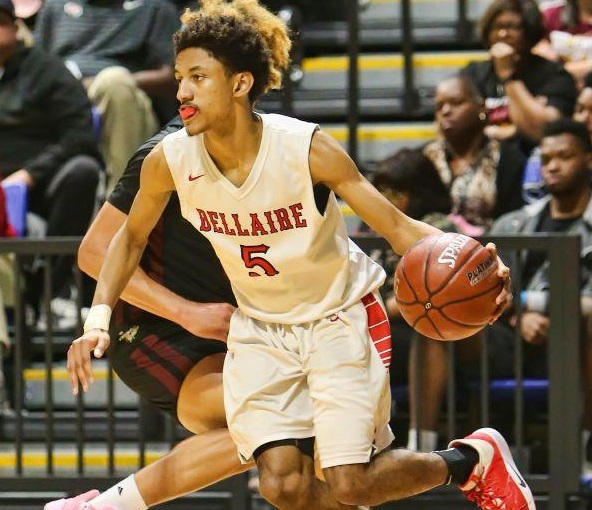 “…I’m not scared of anybody,” Calvin said. “If you have to stand in between the lines with me, that is what we are going to have to do; we have to battle it out,”

Calvin posted quite the performance in the Class 6A Regional Tournament where he helped the Cardinals knock off favored Summer Creek in the semifinal game, and pushed No. 2-ranked Dickinson to the edge in a 70-61 loss in the regional final.

Going into the game against Dickinson, Calvin maintained the right attitude for the battle to come, and was ready for a “dog fight.”

The scrap in Bellaire’s team is a reflection of Calvin, their leader.

On the court, Calvin’s crossover and quick first step grant him access to some highlight reel action off the dribble. What stands out the most is his leadership, which proved effective throughout the Dickinson game.

With Calvin and two other returning starters, Elijah Lawrence and Jacolb Cole, running it back next year, watch for the Cardinals to be back at it again with another year of experience under their belts.

Bellaire head coach Bruce Glover said “leadership” is what makes Calvin so special to the team.

“Jaylon plays hard, is a hard worker and a great student,” Glover added.

Here is the one-on one with Calvin.

“I am a pass-first point who gets buckets and does what he has to do to win.”

“I lead this team in practice and whenever I can to get us to state. That was our goal at the beginning of the year and we were just one game away from it.”

“We won because of defense. It is always defense first every time and every game.”

Shout-outs: “My mom. I know you are watching over me.”