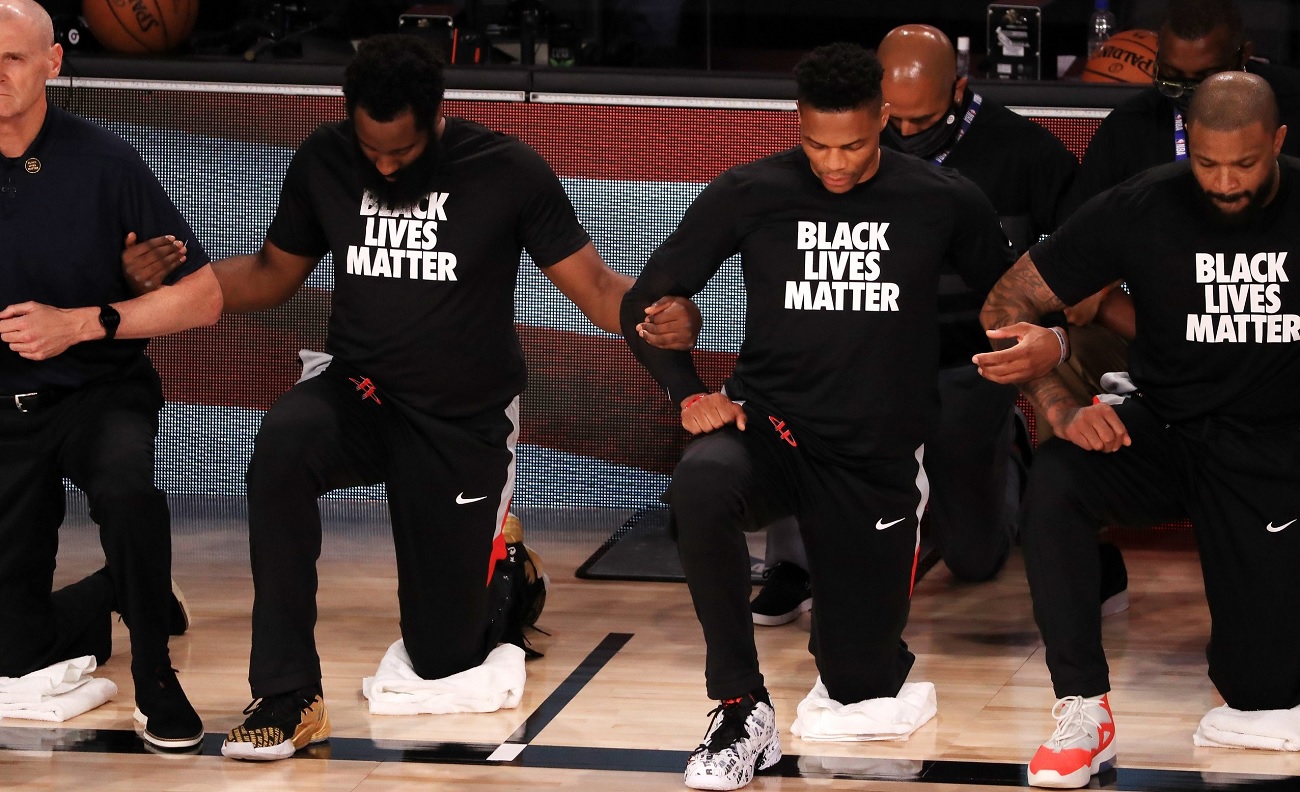 First, the Milwaukee Bucks said they would not play. Then, reports surfaced the Houston Rockets and Oklahoma City Thunder would also put their Game 5 on hold. The Los Angeles Lakers and Portland Trail Blazers were reportedly set to follow suit.

Then the NBA officially canceled everything.

On a dizzying Wednesday afternoon, NBA players crossed a historic threshold in athlete activism. Incensed over the shooting of Jacob Blake, a 29-year-old Black man who was shot in the back by police seven times Sunday night in Kenosha, Wisconsin, players expressed frustration this week about their inability to affect social change inside of the NBA Bubble in Orlando, Florida. On Monday, Bucks point guard George Hill said he regrets participating. We can’t do anything here,” he said to reporters, via NBA.com. “We shouldn’t have even came to this damn place, to be honest. I think coming here just took all the focal points off what the issues are.”

The Bucks never took the floor Wednesday to warm up prior to their scheduled Game 4 matchup against the Orlando Magic, with news of the boycott breaking shortly before the scheduled 3:00 p.m. tip-off. In a short statement to The Undefeated, Hill put it simply: “We’re tired of the killings and the injustice.”

Shortly after 5:00 p.m., the NBA canceled the rest of Wednesday’s slate, promising to reschedule the games at a later date. The status of Thursday’s contests are uncertain, though it is worth noting players on the Toronto Raptors and Boston Celtics were already discussing boycotting Game 1 of their playoff series.

Since arriving at the World Disney World Resorts, many NBA players and coaches have used their platforms to speak about racial justice issues, while simultaneously resuming the season. LeBron James, a proponent of restarting the season, has spoken at length about the case of Breonna Taylor, who was unarmed when she was killed in her apartment by police in Louisville, Kentucky last March. In the aftermath of Blake’s shooting, James delivered a poignant message about being scared in America as a Black man — after dropping a triple-double.

Through four playoff games, James was playing like the best player in the world on the court, and showing himself to be a social leader off of it. It is an incredible feat, and his best postseason performance to date.

Los Angeles Clippers head coach Doc Rivers delivered an especially emotional message Tuesday after his team’s Game 5 blowout win over the Dallas Mavericks, rebuking the Republican Party’s fear-mongering about inner-city protests. “All you hear is Donald Trump and all of them talking about fear,” he told reporters. “We’re the ones getting killed. We’re the ones getting shot. We’re the ones that we’re denied to live in certain communities. We’ve been hung. We’ve been shot. And all you do is keep hearing about fear.”

Doc Rivers got emotional while talking about Jacob Blake being shot by police and social injustice. pic.twitter.com/qQI2Ld2DGI

But the act of boycotting playoff games goes beyond national anthem demonstrations and poignant post-game remarks. Up until this point, NBA players and coaches were centering their activism around the games. Now, their message is front and center, with the games distantly in the background.

According to ESPN’s Adrian Wojnarowski, the rest of the playoffs are now in jeopardy, with players expected to meet Wednesday night and chart out their next steps.

Up until this point, the NBA has enthusiastically supported its players’ social justice stands, painting “Black Lives Matter” on the courts and encouraging them to amplify their messages. But the games were still being played, which means owners were recouping their lost TV revenue. League officials were caught off-guard at the boycott announcements, Wojnarowski reports.

In a capitalistic society, the most surefire way to engineer social change is to impact — or at least threaten to impact — somebody’s bottom line. Look no further than the Washington Football Team, which dropped its offensive Redskins moniker this summer, following pressure from powerful sponsors such as FedEx and Pepsi. Owner Daniel Snyder did not buckle at years of litigation from Native American groups, but he did when FedEx, which owns the naming rights to his stadium, expressed its opposition to the Redskins name.

The players are potentially surrendering revenue, too, since they are partners with the owners. In essence, they are boycotting their own business. It is strong, bold, and historic, and has already spawned copycats. The Milwaukee Brewers also decided to not play their game Wednesday, and additional MLB teams are considering the same thing, says ESPN’s Jeff Passan.

These boycott movements are not being engineered in boardrooms and splashed with corporate logos. They are not cynical examples of corporations co-opting the language of social activism and making it part of their pre-existing culture. Professional athletes not showing up to their own games is the definition of disruption.

The most powerful movement in sports history has commenced.