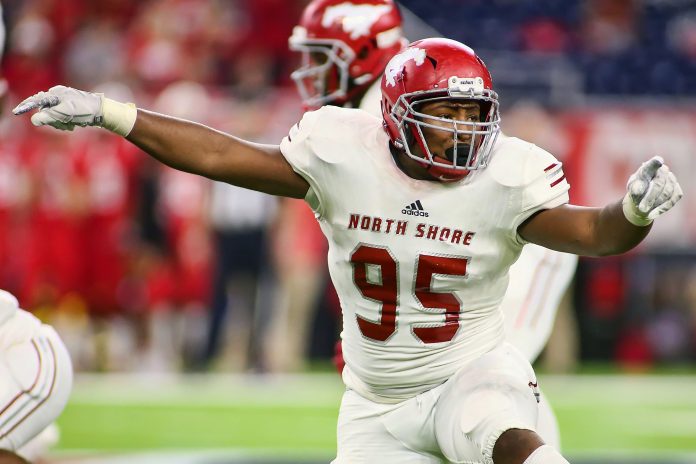 The two define the term playmaker because they make plays. In the most recent 49-38 playoff victory over Katy, Bradford made a key sack on third and goal and shifted momentum, forcing Katy to kick a field goal late in the game. On an ensuing offensive drive Revels caught a play-action touchdown pass to put North Shore up double digits in the second half.

“You know their athleticism speaks for itself, their performance speaks of itself,” Kay said. “But [they possess] day-in and day-out leadership. They are constantly giving the top example of what we’re looking for in our program and I think the guys are willing to follow their lead and consequently you have really productive defense.”

Defensive coordinator Garrett Cross said of Revels, “He is definitely one of our best football players on our team. You saw him catch a touchdown pass tonight, and obviously he is always putting the pressure on and always making a big play for us.”

“He gives us a real gutsy performance week in and week out. He has to go up against double teams every week and he does a great job taking them on.”

The Defender spoke with Bradford and Revels after the Katy game.

Bradford:Aggressive. I don’t like offensive lineman. My goal is always to dominate the line of scrimmage.”

Defender: What were the keys to the defense’s success in the rematch game against Katy?

Bradford:Just not giving up. It was a close game and for the longest we just didn’t give up. We also made plays when we needed them.

Defender: As a leader on defense, what is your message to your team going forward in the playoffs?

Bradford:“Just keep pumping, keep doing what you believe in, trust the process, trust the plays, do your job and everything will be alright.”

Defender: What inspired your decision to commit to Texas Tech?

Bradford:I went up there and it had everything I needed. I liked the facility, the dorms, the players and coaches. So that is why I decided to be with them.”

Defender: Talk to us about the touchdown catch you made in the second half.

Revels: “We had been practicing all week. I scored one last week and it felt amazing to make a big-time play in this game.”

Defender: What were the keys to success against Katy’s offense?

Revels: “They tried to run it down our throats and we just came with it.”

Defender: What are your personal goals going up against Cy-Fair next?

Revels:“Keep the intensity going and just ball out.”

World he would solve: Racism

World Problem he would solve: Homelessness