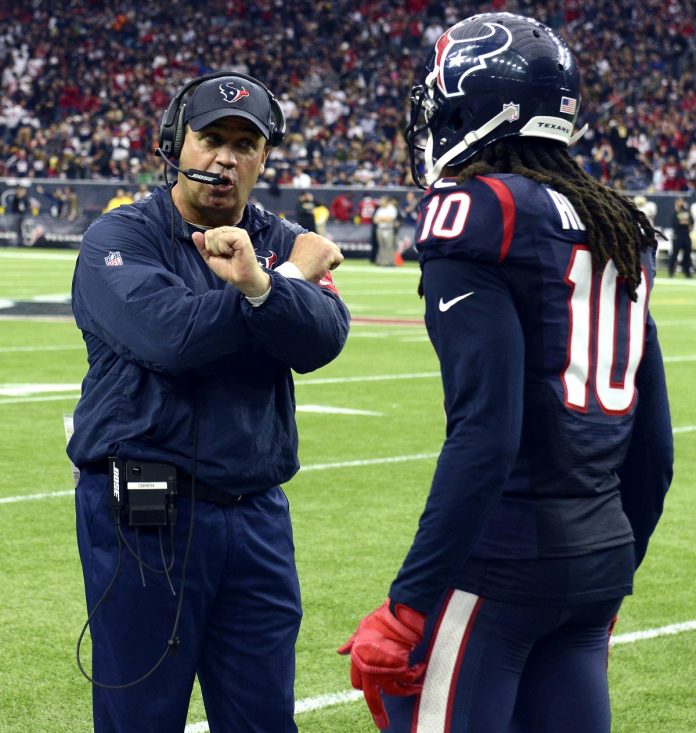 Texans coach and general manager Bill O’Brien has faced harsh criticism for weeks in silence after the sudden decision to trade star receiver DeAndre Hopkins to the Arizona Cardinals.

O’Brien finally broke his silence Friday, telling season ticket holders in a town hall style conference call that decision to move on from Hopkins came down to the three-time All-Pro receiver wanting more money. So rather than tear up his existing contract, O’Brien made the decision to trade Hopkins for a high-priced reserve running back and a second-round draft pick.

“I would say the deal with Arizona was a deal that we felt was in the best interest of our team,” O’Brien said to the season ticket holders. “Andre Hopkins was a great football player for us here. He made so many plays for us.

“We love DeAndre Hopkins, but he had three years left on his deal and he wanted a raise. We weren’t going to be able to go in that direction.”

Hopkins had three years and $39.9 million remaining on a five-year deal he signed in 2017, which was a relative bargain for a receiver of his caliber.

According to reports, Hopkins may have been seeking a contract that would have paid him somewhere between $18 and $20 million per season.

The market for top receivers in the league has changed considerably with Michael Thomas (Saints), Julio Jones (Falcons) and Amari Cooper (Cowboys) all agreeing to bigger contracts recently. Hopkins’ numbers and productions the last four years certainly stacks up with the top receivers, coming in second in the NFL in catches (393) and third in touchdowns (35) and receiving yards (5,069) during that span.

Perhaps what has been most perplexing about the trade is what the Texans received in return for Hopkins. The way it is being portrayed is that the Cardinals were able to unload the hefty contract of running back David Johnson, who has just 345 yards and two touchdowns last season and was benched.
Johnson is still owed more than $20 million over the next two years.

“We felt we had a great offer from Arizona that involved picks, it involved an excellent three down running back who’s hungry and humble and can’t wait to get started,” O’Brien said. “David Johnson is going to be a great addition to our football team.”

O’Brien continued to make his case for why the trade needed to be made and it kept going back to money.

“Every decision we make as long as I’m the football coach here will always be made in the best interest of the team.”