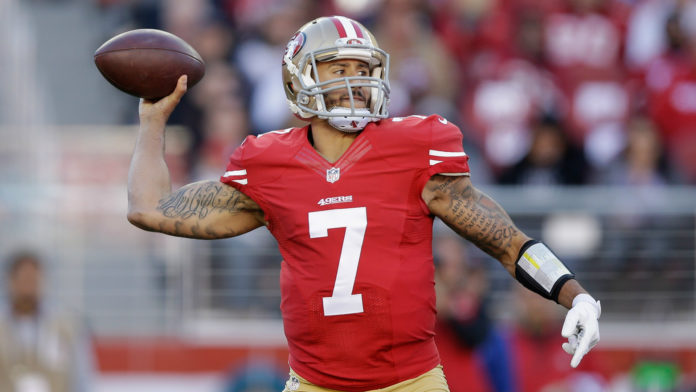 Mired in the middle of another slow start, the San Francisco 49ers are debating whether or not to start backup quarterback Colin Kaepernick. The 28-year-old signal-caller has been the talk of the early season with his decision to kneel during the playing of the national anthem before games to express his displeasure with the number of killings of Black individuals across the country.

His acts have drawn both heavy criticism and widespread praise, but both been somewhat subdued due to the fact that Kaepernick hasn’t gotten on the field this season. However, with incumbent starter Blaine Gabbert continuing to make mistakes, Kaepernick could see play again, and the media circus won’t be far behind.

Kaepernick’s play has tailed off tremendously after a blazing start to his career which saw him lead San Francisco to a Super Bowl appearance. He was benched last season for his poor play and nearly cut from the team in the offseason. Should Kaepernick re-enter the starting lineup, he’ll face enormous scrutiny of both his play and his protests. Can he be the leader of the team while still expressing his personal opinions? Will his teammates respond to him the same? How will the fans react? With so many questions, it’s interesting to consider the ramifications of Kaepernick manning a team.

It won’t be pretty if Kaepernick doesn’t impress should he return to the lineup. Any mistakes, poor throws or losses will be watched carefully, and it won’t be long before critics find a way to tie his beliefs into the equation. Kaepernick’s been bold and brave in the face of criticism, however, and he’ll stand tall again if he needs to. The 49ers are horrible and Kaepernick will surely be taking the reins of a sinking ship. But if there’s any quarterback in the NFL with enough guts to be up to the challenge, you’d have to go with football’s leading nonconformist.

Whether he takes the field in the near future or not, it will be happening sometime this season. The 49ers announced on Oct. 7 that they are working on a restructured deal for their backup signal caller. With all sorts of clauses and outs, San Francisco seek to free themselves up from financial obligations to Kaepernick in the future while giving the quarterback a chance to test free agency next season. One of the agreements in Kaepernick’s deal allows the 49ers to free themselves from an injury clause that would have paid Kaepernick close to $14.5 million in 2017. With the clause taken out, there is no financial harm if the team wants to play Kaepernick this season and he gets hurt.

San Francisco (1-4) has lost four straight games with Gabbert under center. The only excitement the team could probably muster at this point would have to involve their controversial backup. But the 49ers will have to be careful, as unleashing Kaepernick could be opening Pandora’s box.