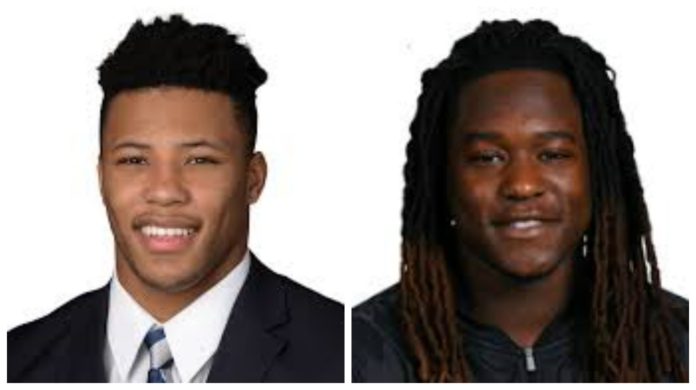 The NFL draft begins on April 26 at AT&T Stadium in Arlington. The draft is a three-day activity where college players can fulfill a lifelong dream – playing professional football.

With so much interest placed on the quarterback position (five QBs are projected to go in the first round), often, the best NFL prospects based on pure athletic ability are overlooked. Two of those prospects this year are Penn State running back Saquon Barkley and Central Florida linebacker Shaquem Griffin.

ESPN draft experts Mel Kiper and Todd McShay both agree that Barkley is the top college prospect in the 2018 draft. At 6-feet, 233 pounds, Barkley passes the eye test. He is a total-package back who ran for 3,843 yards and 43 touchdowns and caught 102 passes for 1,195 yards in three seasons.

Barkley is described as an explosive runner with a rare combination of size, speed, body control and competitiveness. He displays burst to turn the corner and run away from pursuit when he catches daylight. He has the lateral quickness to make defenders miss in the hole and on the second level.

He shows good vision and patience running between the tackles in addition to a good feel for cutback lanes and open field instincts. Barkley takes care of the football. His career fumble percentage (0.5 percent) on offensive touches is excellent and he didn’t fumble once despite 271 offensive touches in 2017.

Barkley put on a clinic at the NFL scouting combine. He ran 4.4 seconds in the 40, bench-pressed 225 pounds 29 times and his vertical was 41 inches. Despite the effort he doesn’t want the combine to define him.

“I’m over this stage, running in shorts and sweatshirts,” Barkley said. “That’s cool and all, but I’m not a combine guy. I want you to throw on the film and I want to show that I’m a football player.”

Barkley doesn’t spend a lot of time worrying about the draft.

For comparable reasons scouts are buzzing about linebacker Shaquem Griffin. If you’re not familiar with Griffin, he’s the one-handed linebacker.

Griffin was born with amniotic band syndromeaffecting his left hand, causing his fingers not to fully develop. At age 4, his mother found him in the kitchen, attempting to use a butcher’s knife to self-amputatehis fingers due to the pain. His parents scheduled an amputationthe next day.

Griffin was a two-year starter at Central Florida and a first-team All-American Athletic Conference selection in each of those seasons. In 2016 he was the league’s Defensive Player of the Year with 92 tackles, 11.5 sacks, an interception and two forced fumbles. (His twin brother Shaquill also played at Central Florida and is a Seattle Seahawks cornerback).

At the combine, Shaquem Griffin continued to blow scouts away with his overall ability. He used a prosthetic hand to help put up 20 reps in the bench press and then clocked a time of 4.38 seconds in the 40, the fastest of any linebacker in the history of the combine. He initially wasn’t invited to the combine.

At 6-feet, 227 pounds, Griffin has the ability to play linebacker as well as safety. He has physical limitations due to his hand amputation, including getting off blocks and wrapping up as a tackler. But he’s fast, athletic and instinctive enough to contribute on special teams and as a sub-package defender in the NFL. He’s expected to be drafted in round three.

After his recent pro day workout, Griffin discussed how far he’s come in the pre-draft process.

“I was a guy who was under the radar who they didn’t believe in at first but I feel like they’re starting to believe now,” he said.