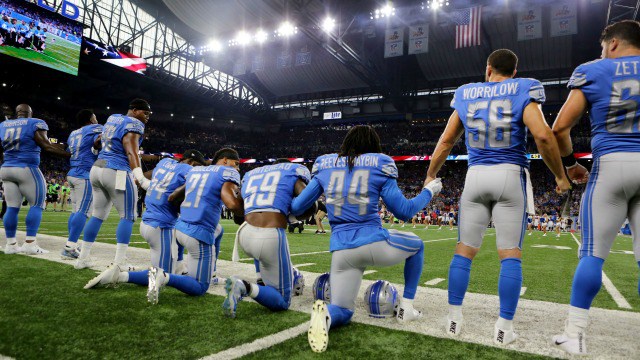 Detroit Lions owner Martha Ford reportedly offered to donate to her players’ causes if they would stand rather than kneeling during the national anthem.

According to Dave Birkett of the Detroit Free Press, Ford had linked arms with players during the national anthem but was trying to find a different way to protest and was even willing to more or less bribe her players to do so.

“In exchange for finding a different way to protest racial injustices around the country, Ford said she would be willing to donate both money and her name to community issues at the heart of the players’ cause,” Birkett wrote.

“As a team, we came together, talked to Mrs. Ford, the owners, and we understand the issues for the most part, generally,” running back Ameer Abdullah said. “Me personally, I definitely want to be an aid in growing the social awareness in this country, that it is a race problem in this country.”

“We do dance around the topic a lot and Mrs. Ford has come forward and said that as long as we compromise as a team and unify and make a unified demonstration, she’ll back us financially. So I’m definitely going to hold her to her word.”