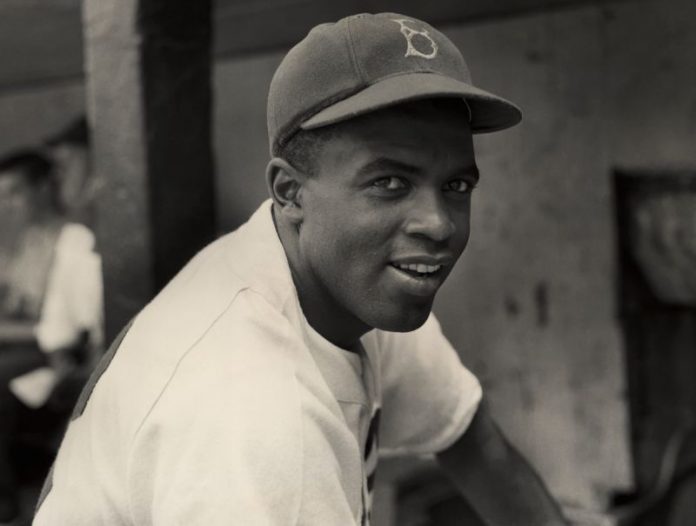 On April 15, 1947, Jackie Robinson broke Baseball’s color barrier when he made his historic MLB debut.

When preserving an important slice of history, we don’t really need a stadium and a live game to do so.

Wednesday is Jackie Robinson Day, and yes, it would be more gratifying if we could be at the ballpark, grab a hot dog, cheer the players all wearing uniform No. 42 and remember baseball’s most important pioneer in more traditional ways. It would be nice to acknowledge April 15 in the manner we’re accustomed to.

But now is a time for adjustments, and adjust we shall. April 15 is a historic day, and it marks the most important moment in baseball history — the breaking of the color barrier. It’s a day to be celebrated, regardless of the circumstances.

Every platform Major League Baseball utilizes to disseminate information will be dedicated toward celebrating Jackie Robinson Day. That includes airing a constant stream of past games that were played on April 15, running documentaries detailing Robinson’s life and presenting feature stories reflecting on Robinson’s influence on baseball, civil rights and scores of African-American players who became stars in the years and decades following Jackie’s entry into the big leagues. MLB’s social platforms will also feature custom, original content, and fans are invited to celebrate the day and post recorded messages and photos on social media of what Jackie and his legacy mean to them, using the hashtag #Jackie42.

Here is our round-the-clock plan to celebrate an American hero:

The following will stream on MLB.com (all times Eastern)

This Jackie Robinson Day had plenty of spice: a Matt Kemp homer (his fourth in three days), a Dodgers triple play and a Dee Gordon walk-off hit that led the Dodgers to a 5-4 win over the Padres.

In the only World Series the Dodgers would win in Brooklyn before they moved to Los Angeles in 1957, relive footage of Robinson playing in the World Series for the Dodgers, who beat the Yankees in the best-of-seven series.

“Letters To Jackie” focuses on Robinson’s role in the American civil rights movement, predominantly after he retired from baseball. Hosted by Curtis Granderson and narrated by actor Dennis Haysbert, the story is told in Robinson’s own words, through correspondence he maintained during his lifetime with political figures, including Presidents Dwight D. Eisenhower and John F. Kennedy, and a young pen pal named Ron Rabinovitz, with whom Robinson kept in touch from 1955 to his death in 1972.

This game marked the 50th anniversary of Robinson’s Major League debut on April 15, 1947. In an on-field ceremony at Shea Stadium after the fifth inning, Commissioner Bud Selig, standing with Robinson’s widow, Rachel, and President Bill Clinton, announced Robinson’s No. 42 would be retired across the game. Current players who wore it would be permitted to continue to do so, but the number would never again be issued without precedent.

This game had a little something for everyone. The day began with ceremonial first pitches by Commissioner Rob Manfred and Oscar-winning actor Jamie Foxx. The game featured two of the best pitchers in baseball — the Phillies’ Aaron Nola vs. the Mets’ Noah Syndergaard. It ended in 11 innings, with the Mets prevailing, 7-6.

Additionally (and perhaps, most importantly), this was a fashion-forward day. Bryce Harper busted out specially made blue-and-gold cleats that paid homage to Jackie’s days as a UCLA Bruin, and Robinson Cano, who was named after the Hall of Famer, wore Nike cleats featuring images of Robinson sliding into home plate.

7 p.m.: This airing of the 1955 World Series film will be unique, in that it will be streamed exclusively on MLB’s social channels on Facebook, Twitter and YouTube.

The following will air on MLB Network

Who doesn’t like a good old-fashioned walk-off walk? Giants closer Brian Wilson inherited a bases-loaded situation with no outs and walked James Loney to force home the winning run in Los Angeles’ 5-4 win at Dodger Stadium.

How poetic is it that a player named after Jackie Robinson absolutely rakes on Jackie Robinson Day? In this game, Robinson Cano — yes, that’s why his name is Robinson — hit two home runs, recorded three RBIs and led the Yankees to a 6-2 win.

Griffey sits down with MLB Network analyst and former Seattle Mariners All-Star Harold Reynolds to discuss the legacy of Jackie Robinson in an all-new episode of MLB Network’s “Play Ball.” Robinson’s place in American sports history is documented throughout the program, plus a discussion of the impact Robinson has made on generations of African-American players.

On the 70th anniversary of Jackie Robinson Day, the Pirates were behind early, but staged a thrilling comeback win that included a five-run seventh inning.

This documentary, which first aired on PBS on April 11, 2016, traces Robinson’s path from his humble origins to becoming one of the most beloved men in America. Robinson used his grand platform to fight discrimination that he saw on and off the field, often angering fans, the media and teammates who once lauded him for ignoring the backlash he endured while breaking baseball’s color barrier. In his post-baseball life, Robinson fought tirelessly for civil rights, even as his body was failing him from years of suffering from the effects of diabetes.

MLB.com reporters have compiled features covering an array of topics that celebrate Robinson’s legacy. From this compilation, there is something for everyone. A sampling:

Columnist Richard Justice examines why we celebrate this day, and why Robinson is the only player with his number universally retired. Before the modern civil rights movement, before President Harry Truman integrated the military, before the Rev. Martin Luther King Jr., before the 1954 Brown vs. Board of Education decision desegregating public schools and the 1964 Civil Rights Act, there was Jackie Robinson. He and the rest of the Dodgers were a living, heroic, daily example to the nation — evidence of integration’s promise, proof that it could succeed. More >

The tradition of every player, coach and manager wearing No. 42 on Jackie Robinson Day began with one player: Ken Griffey Jr. “The Kid” first wore the number in 1997, and then 10 years later asked Commissioner Selig if he could do it again, and a custom was born. More >

If not for World War II, Jackie Robinson may never have played in the Negro Leagues — nor become the man to break the color barrier in the Major Leagues, writes reporter Bill Ladson. But his success, in opening the door for other African-American players to follow him, ended up closing the door on the Negro Leagues. More >

Robinson played for the Dodgers for 10 seasons, but in the 15 years after that he had a more important role as a civil rights activist and icon. His daughter, Sharon, recalls those years with reporter Bill Ladson. More >

Jackie’s accomplishments go beyond mere statistics on the baseball field. Reporter Chris Haft highlights 10 significant moments in Robinson’s life, from meeting “The Mahatma” to calling for the first black manager of a Major League team. More >

Jackie Robinson broke baseball’s color line on Opening Day 1947, but the Braves and Dodgers weren’t the only teams playing that day. Rangers beat writer T.R. Sullivan takes a look at some of the other baseball headlines from April 15, 1947. More >

Test your knowledge of Robinson’s life and career in our Quiz of the Day. More >

When the Kansas City Monarchs recruited Jackie to play for them, they didn’t find him on a baseball field or in California, where he grew up, or at UCLA, where he lettered in four sports. They found him coaching college basketball in Austin, Texas. Astros beat reporter Brian McTaggart has the story. More >

Fifty years before he retired Jackie Robinson’s No. 42 across all of baseball, Commissioner Bud Selig was a 12-year-old fan who took the train from Milwaukee to Chicago to see Robinson play his first game at Wrigley Field. It’s a memory that has stayed with Selig ever since, writes beat reporter Adam McCalvy. More >

Jackie wasn’t the only player considered by Branch Rickey and the Dodgers to break baseball’s color barrier. Monte Irvin, a star for the Newark Eagles, was believed to be the pick among Negro Leagues owners, writes beat reporter Maria Guardado. But the future Hall of Famer didn’t think he was ready after coming back from serving overseas during World War II. More >

Beat writer Mandy Bell reflects on the life and career of one of the most interesting figures of a bygone generation: Satchel Paige. Had Robinson not broken through in 1947, MLB would never have had Paige, who after a decorated Negro Leagues career helped lead the Indians to the 1948 World Series title. The door was closing on Paige’s career, and had Robinson not broken through when he did, the opportunity for Satch likely would have passed. Even though he wasn’t the same pitcher at his advanced age, he still was effective — and a joy to watch. More >

Rangers beat reporter T.R. Sullivan provides a delightful feature on a country music singing legend who once aspired to play in the Major Leagues.

Charley Pride, a regular visitor to the Rangers’ Spring Training every year, was inspired by Robinson’s journey to the Major Leagues. As a 13-year-old son of a poor sharecropper in the Mississippi Delta, Pride observed Robinson’s ascent to the Dodgers and set his own goals to do the same.

Pride, now 86, didn’t reach the big leagues, but he played in the Negro Leagues and the Minor Leagues. Then, with guitar in hand, he became a singing legend, still performing after all these years. More >

Before he became the legendary voice of the Tigers, Ernie Harwell called games for the Brooklyn Dodgers and forged a friendship with Jackie Robinson. But as beat reporter Jason Beck writes, that may never have come to pass if Branch Rickey hadn’t swung a trade to bring Harwell north from the Atlanta Crackers. More >

In 1953, an 8-year-old Jewish boy from a small Wisconsin town began a correspondence with Robinson that lasted until the Hall of Famer’s death in 1972. Beat reporter Do-Hyoung Park looks back at the friendship between the icon and Ron Rabinovitz. More >

Executive reporter Mark Feinsand reminisces about the legacy of the last player to wear No. 42 — Hall of Fame closer Mariano Rivera. At the time Robinson’s number was retired in 1997, 13 active players were wearing No. 42. Those players were grandfathered in to continue wearing it for the remainder of their careers, but it would never be assigned again once they were all retired. Rivera, who retired in 2013, was the final player to wear the number. More >

Baseball fan and award-winning disc jockey DJ Envy will host a special set on Instagram (@DJEnvy) on Wednesday from 7 to 9 p.m. ET, to place an appropriately celebratory cap on Jackie Robinson Day. MLB players and celebrity guests will make special appearances throughout the set. More >

The hub is a platform to deliver educational programming to educators and parents for students in grades K-12. Divided appropriately by age groups, the programming will address different aspects of Jackie’s life and legacy and will feature video vignettes of Jackie’s daughter, Sharon, as well as former MLB players. JRLegacy.org >

Jackie Robinson Day is for everyone, from the very young to the very young at heart. MLB.com’s presentation will include a full slate of activities for the kiddos, including crossword puzzles, connect the dots, a coloring page, a word search and a page that invites kids to practice their writing skills. More >