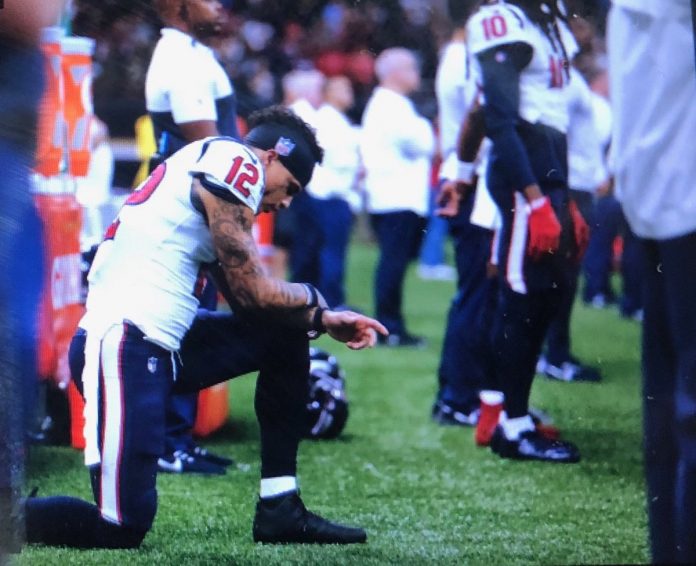 With his social conscious awakened by the deaths of Trayvon Martin, Eric Garner and Michael Brown Jr., and being inspired by the protests of 49ers quarterback Colin Kaepernick and USA soccer player Megan Rapinoe, Kenny Stills is courageously using his NFL platform as a Houston Texans wide receiver.

Stills’ advisors urged him not to protest until he secured his long-term contract. They were fearful that Stills would be snubbed by the NFL once his rookie contract expired. Despite the warning, Stills continued to protest and signed a four-year, $32 million contract extension on March, 8, 2017.

After two seasons with the Dolphins, Stills was traded to the Houston Texans during the 2019 preseason.

In the Texans recent season opener, Stills took a knee during the anthem in his first game.

The move has not come without backlash. He’s had death threats and racial slurs spewn on social media. Stills, an avid reader, continues to take his responsibilities to protest seriously. He has remained a consistent volunteer with military veterans, and children’s hospitals, as well as numerous other charities and community organizations.

The Defender spoke with Kenny Stills about who he is on and off the field, his beliefs on the role he believes an athlete should play in the community, his inspirations for protesting and more.

Defender:  Who is Kenny Stills?

Kenny Stills:Kenny Stills is a person that has been given a platform to influence people in a positive way. So, that’s what I try to do – just improve myself and the man that I am, and use every single day to uplift my family, my friends, my teammates, and everyone that I am around.

Defender: You have demonstrated you are a man of conviction. What role do you think today’s athlete should play in the community?

Stills:I think athletes should do their best to try to be a positive influence in their communities. Somebody had some type of influence or helped you get to where you are. So, I think we should always pay it forward, try to get involved in a way, and bring others along. It’s not anyone’s responsibility to do anything but I try to encourage guys to give back to their communities and bring other people along with us.

Defender: You have a reputation for kneeling during the national anthem. Why did you start, and continue to kneel this season.

Stills:It’s no reputation, it’s just what I’ve been doing. Promote player protest. People have been looking at the national anthem from the beginning and it’s important to me that the families of victims of police brutality be known, and then shown, that somebody cares. You know I didn’t forget where I come. The things that are going on in the country aren’t right and it is not okay. We’ve got to do something about it. The protest is just the first step in letting people know that it’s action we go through throughout the week to try and make others change behind it.

Defender: Who are some of the other people and events that inspired you in your life?

Stills:I have been learning about my history more and more since I started the protest. So, obviously I was inspired by Kap, Megan Rapinoe and Eric Reid. Just seeing them as athletes using their platform for good at a time when I was seeing a lot of police violence, and people being killed on Twitter and Instagram. I felt helpless and I didn’t know what I could do. How could I do something that was impactful? I saw what they were doing and I wanted to get involved.”

Defender: What are your thoughts on the Fair Pay to Play Act that was recently signed in California?

Stills:All I can say from my experience is that when I was a college athlete, we were making $900 a month on scholarship. My rent was $500 or $600, and my phone bill was $100. So, it left me with $300 to live with for the month. Since school didn’t provide us with meals, I was asking people to buy me food because my parents didn’t give me any money. It was a struggle for us to see a #4 jersey being worn in the stadium and being sold for $65/$75 in the team store or library or whatever and me having to ask my friends to buy me some lunch or hanging out outside of the normal student dorms so I can go eat in their cafeteria. It just didn’t make any sense and it was frustrating and irritating. So, I hope we can develop some type of system to where the guys aren’t struggling like that and can at least get paid off their likeness.”

Defender: When it is all said and done, what do you want people to say about Kenny Stills?

Stills:I would just say I would want people to remember me as somebody that cared about other people, that loved other people, and did his best to bring everyone from different backgrounds together. I feel like the more that we can learn about each other brings us out of our comfort zones, and helps us realize that we’re more alike than we think.