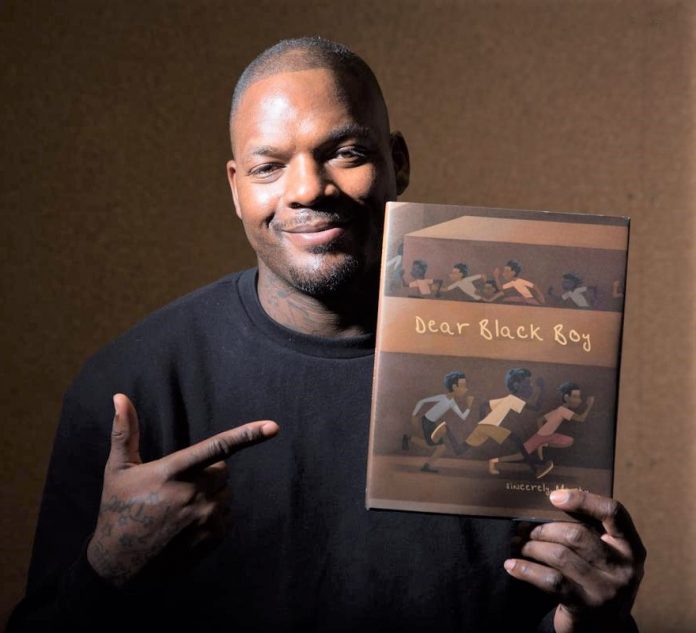 “I wrote this project after the Alton Sterling shooting and then the Philando Castille murder,” he said. “There was so much going on in the world and I was able to identify with it. That could be me, that could be my brother, it could be my cousin.”

Bennett hopes the book will motivate African-American boys to realize their unlimited potential.

“When I look at kids, I see myself,” he said. “Hopefully when they look at me, they see themselves. I want to give them a message that you guys are the ones who will change the world. To change the way society looks at us we have to change the way that we look at ourselves that’s the message of the book.”

“Dear Black Boy” encourages youth to look beyond sports as a means to an end.

“The book explains that sports are cool, but there’s a bigger game going on out there – it’s the game of life,” Bennett said. “Are you prepared for that? You have to prepare for life the same way you would prepare for the NFL.

Bennett, who was drafted in the second round in 2008 out of A&M by the Dallas Cowboys, spent 10 years in the NFL between six teams. He punctuated his career with a Super Bowl 51 win in his hometown as a member of the New England Patriots.

“It’s all about a thirst I could never quench, a thirst to learn more, accomplish more and become more,” he said. “I’m always trying to learn and grow and achieve multiple things, so people realize one dream isn’t enough.”

Being an opinionated, educated athlete who’s not afraid to speak his mind is a trait that was encouraged in the Bennett household.

“My mom is a very outspoken woman and my dad is a very outspoken man. At the table our parents allowed us to speak our point of views,” he recalled. “Even to this day we get into debates. My dad has an idea, I have an idea and we just discuss our personal points of view on whatever the topic is as a family. If we’re comfortable expressing ourselves in the home, then why can’t I express myself in the world.”

He resents the notion espoused by Fox reporter Laura Ingraham when she told LeBron James to “shut up and dribble.”

“That mentality bothers us,” Bennett said. “Athletes are so much more than athletes, but a lot of us don’t put all of themselves into the world because being a successful athlete is good enough.

“Now, you see more athletes taking control of who they are and controlling their brand. They’re doing different things and crossing over into different platforms. Because of that people are starting to look at athletes differently than they did in the past.”