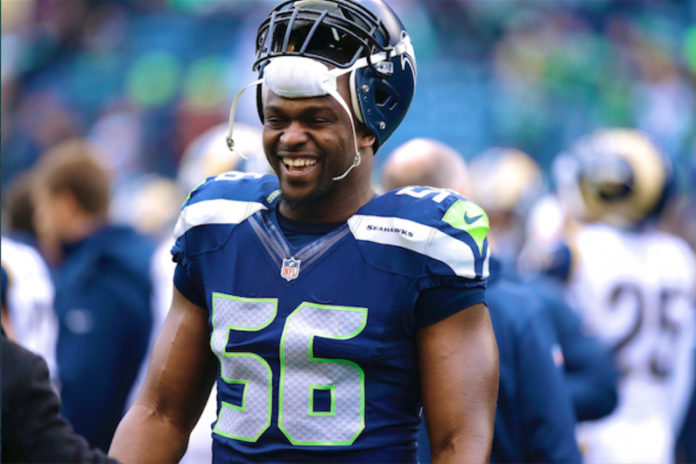 Cliff Avril entered the NFL in 2008 as a third-round draft pick out of Purdue. He landed in Detroit, and instantly made an impact rushing the quarterback for the Lions, earning All-Rookie honors as a defensive end. While football was his primary focus, Avril soon envisioned the game as a platform for making a positive impact in the community.

“When I first got in the NFL, I had an inkling and I had a feeling that I wanted to do some things in the community,” Avril tells The Huffington Post. “But for me, I was worried about people not supporting me because I wasn’t really known. As I matured a little more, got married, had kids ― my view and vision on life changed completely.”

Avril’s vision became clearer after a few years in the league: He wanted to help others on a larger scale. His parents are both from Haiti ― the Caribbean island nation suffering in the wake of a devastating 2010 earthquake and now again from Hurricane Matthew ― and he traveled there every summer until he was 15 years old. Naturally, his interest in helping Haiti resurfaced, especially given that it’s the poorest country in the Northern Hemisphere.

“I was thinking more of what I can do for these kids,” the 30-year-old says. “Then going out there and seeing it firsthand, I was like, ‘I want to go out there and build them a whole school.’ Initially it was just a classroom, and they tried to get donors and other people to try and come up with the rest of the money for the school. I said, ‘Screw that, I just want to do it myself.’”

Avril, through the Cliff Avril Family Foundation and a partnership with an organization called Free the Children, started by fixing up two classrooms. Two turned into four, which turned into seven.

Once he reached that number, Avril decided to construct an entire school. But it wasn’t merely the infrastructure ― it is built to withstand natural disasters ― that needed special attention. A new school also meant better textbooks and making sure the children actually had shoes, a luxury most could not afford for the 90-minute walk to and from school every day.

During a visit following the earthquake, Avril and his wife, Tia, realized that there was an even larger problem developing at a local orphanage.

“Cliff had told me all the stories about Haiti,” Tia tells HuffPost. “I was all on board. We get to this remote community where the people were so passionate about education. They just had so many obstacles. They were just so appreciative.”

One of the key obstacles was something as basic as water.

“They showed us a water reservoir of where they store all their water,” Avril says. “They literally had 1 inch of water left in it. It’s crazy because we knew we wanted to give them water but they were literally on their last inch. … It was very humbling.”

As he learned more, Avril realized that perhaps the largest need ― even more so than schools ― was actually housing. “How can kids go to school if they don’t even have a place to sleep?” Avril started asking himself.

After joining forces with the Baltimore Ravens’ Elvis Dumervil, the two are now helping build permanent homes for families throughout Haiti.

“We’re using all Haitian workers to help stimulate the economy,” Avril says. “And every sack I record this season [his 7.5 sacks are tied for third in the NFL], results in one new home in Haiti. After the hurricane, I just felt like I needed to do something right now. We partnered with The Mission of Hope ― whether its feeding people or providing water [for one full year] and medical assistance, we had to make an immediate difference.”

While Avril ― whose three forced fumbles are tied for second in the league  ― was touched by his experience, he was also humbled by the influx of support he received from fellow NFL players, including Seahawks teammates. Michael Bennett, Richard Sherman and former Seattle running back Marshawn Lynch have all joined the cause. Lynch actually joined Avril in Haiti and physically helped build the school.

“When we were done, I looked at the school and just felt really proud,” Lynch tells HuffPost.

Avril believes that more players will want to be involved, but only when they make the trek to Haiti and experience the poverty for themselves.

“I’m trying to bring guys with me next year to see the situation,” he says. “You know, everyone has a different view on how bad the situation is in America but it can always be worse, and that’s definitely one of the countries where you can see that.”

The curious part for Avril is that while education plays an increasingly important role in his life today ― he and Tia have two young boys ― that wasn’t always the case. In fact, even at Purdue, Avril’s focus was almost entirely on the gridiron.

“Honestly, school didn’t get important to me until my third year in the NFL when I went back to graduate,” he says. “Now don’t get me wrong, I went to school because I knew I needed an education. … I didn’t value it as much as I should have growing up, it was just something that I had to do. I thought, ‘How am I going to set a precedent for my child to go to school and to get a degree if I went to school for free?’ That’s why I went back and graduated.”

Avril, who is enjoying his ninth professional season and who was recently nominated for the 2016 Walter Payton Man of the Year Award, earned a Super Bowl ring with the Seahawks in 2014 and signed a four-year, $28.5 million contract extension that will keep him in Seattle through 2018.

With that in mind, he believes that now is the time to keep pushing and to keep educating those who will listen. It’s why he has brought a mobile medical clinic to Haiti, hosted a football camp and organized nearly 30 community events in both Washington state and Florida this year.

“There was a time [in Haiti] when there was just food sitting on the tarmac at the airport,” he says, “because certain help groups were saying it was theirs, while other ones were saying, ‘No, it’s ours,’ so it just sat there until they figured out whose food it was to get credit for helping people.”

For Avril, there really is only one answer to that question.