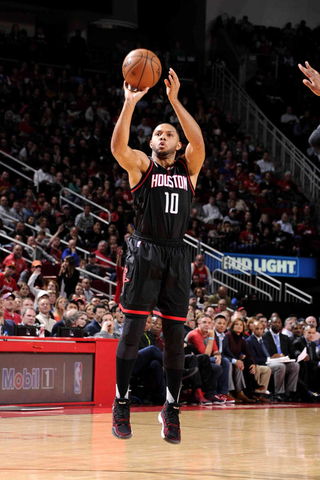 The Houston Rockets are off to another amazing start with the second best record in the NBA. Despite injuries that have sidelined All-Stars Chris Paul and James Harden at different times during the year, the team has continued to persevere.

One of the key reasons the team as stayed sharp despite adversity is the stellar play of guard Eric Gordon, a consummate professional.

Gordon, the 2017 NBA Sixth Man of the Year, has once again shown his value to the team. He is an explosive scorer off the bench leading the second unit and also has been a reliable starter when either Paul or Harden has been injured. He has the versatility to play off the ball or run the offense as a point guard, often times doing both at any point in a game.

Showing no signs of slowing down from his award-winning 2017 campaign, Gordon is averaging 19.6 points per game in 32 minutes per game with a pair of rebounds and assists.

“You have to be a ball player, a professional,” he continued. “Understand what your teammates can do best then go out and play your game. For me it’s all about being aggressive.”

As the leader of the second unit, Gordon has seen the Rocket bench become much deeper and the level of talent is undeniable. Veterans like P.J. Tucker and Luc Mbah a Moute added a blue-collar element defensively that had previously been missing.  Gerald Green provides yet another scoring option with an inside/outside game.

“We have a deep team, but it’s all about having an impact,” Gordon said. “At some point in the game guys have to step up and make a contribution whether it’s scoring or on defense, and we have the talent to do so.”

The bottom line is that the Rockets can play any style an opponent desires and still get the job done.

“When we’re healthy we’re a very tough team,” Gordon said. “We can match up well with anybody. We can play small ball or play with a lot of bigs.”

With a reputation as one of the NBA’s elite teams, the Rockets realize they’re always going to get an opponent’s best game. Teams want to measure themselves up against the best. As a result the Rockets always have to be prepared to put their best foot forward, at home or on the road.

“You know we’re going to get everybody’s best effort,” Gordon said. “Everybody’s going to play hard, work hard and we know it’s coming. We just have to continue to play our game at a high level. When we play our game and play it well from start to finish, then I like our chances in every game.”

We’re playing very well offensively and defensively. We just try to continue to play for each other. We all look for one another to play well every single night. We’re trying to win as many games as we can.

This league is all about winning and it’s tough to win in this league.