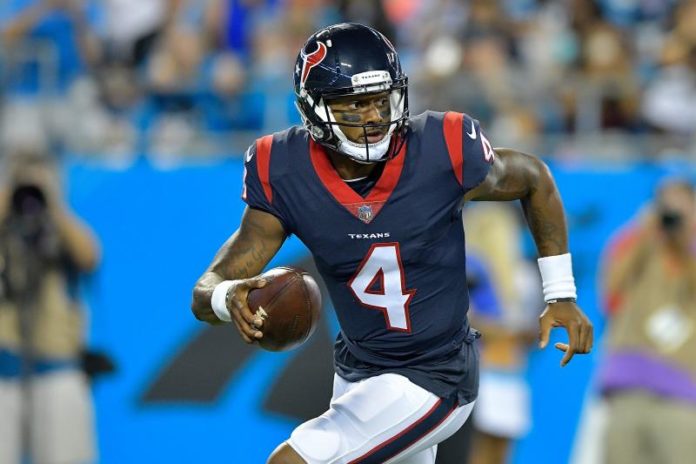 CHARLOTTE, N.C. (AP) — Deshaun Watson reminded everyone why Panthers coach Ron Rivera — and many others — felt he should have won the Heisman Trophy last season.
Watson shined in his NFL preseason debut, completing 15 of 25 passes for 179 yards and running for a score in the Houston Texans’ 27-17 loss to the Carolina Panthers on Wednesday night.

Watson, who led Clemson to the ACC championship on this field last December en route to winning the national championship, received a rousing ovation from Tigers fans dressed in orange when he entered the game in the second quarter.

The cheers grew louder when Watson outran two defenders for a 15-yard touchdown — although Panthers fans tried to cover the celebration with boos.

“It was good just to get my feet wet,” said Watson, who was pleased with his overall effort.
Houston’s first-round draft pick looked comfortable in the pocket, stepping up to avoid pressure and getting rid of the football in a timely manner. He didn’t let penalties on his team affect him and didn’t turn the ball over in nearly three quarters of play.
“He’s a smart player, an instinctive player,” Texans coach Bill O’Brien said.

“For the first game out there I thought he did some good things. That’s a big jump from college to the NFL and I thought he handled it pretty well.”

Tom Savage went three-and-out on his first two possessions against Carolina’s first-team defense. Savage had better luck with Carolina’s starters out of the game, completing 8 of 8 passes for 67 yards on his final drive capped by a 16-yard TD run by Alfred Blue.
But it was a strong showing for Carolina’s defensive starters.

“We put ourselves in good third down situations and we were able to execute and get off the field,” Panthers linebacker Thomas Davis said. “Overall, the first half, the ones definitely had a good showing.”

Anderson completed 4 of 5 passes for 76 yards, including a 23-yard touchdown pass to Kelvin Benjamin to finish with a perfect 158.3 QB rating.

The 6-foot-5 Benjamin, who reported to training camp in good shape after being overweight in the spring, made a leaping grab in the corner of the end zone to give Carolina the early 7-0 lead.

“I am feeling good again,” Benjamin said. “I am ready to get Cam (Newton) back out there so we can rebuild that chemistry.”

J.J. Watt played one series for the Texans in his return from back surgery. Kuechly played six plays after returning from his second career concussion. Neither registered a tackle.

SITTING OUT: Along with Newton, veteran defensive ends Julius Peppers and Charles Johnson, center Ryan Kalil and rookie wide receiver Curtis Samuel did not suit up for Carolina.

Texans: Rookie linebacker Dylan Cole appeared to return a fumble for a touchdown to tie the game in the fourth quarter, but the play was overturned.
Panthers: Christian McCaffrey had 33 yards on seven carries in his rookie debut and showed impressive quickness and the ability to make defenders miss.

Texans: RB Alfred Blue outperformed projected starter Lamar Miller. Blue ran for 33 yards on seven carries including a 16-yard touchdown, while Miller carried two times for no yards.
Panthers: Wide receiver Damiere Byrd, considered a fringe roster player, did nothing to hurt his chances by hauling touchdown passes of 50 and 8 yards from Joe Webb.
WHAT BROWN DOES FOR YOU: The Texans clearly missed left tackle Duane Brown, whose contract situation remains unresolved. Savage was under heavy pressure on the first two series. Chris Clark started at left tackle.

QUOTABLE:
Texans: “I’m so happy to be back with my guys,” Watt said of his return. “It’s so much fun in my D-line room and being back out there with my teammates. That’s where I belong.”
Panthers: “It means a lot,” Byrd said after the first of his two TD catches. “It’s a dream of everybody’s to be able to play for an organization as great as this in the NFL.”
___
AP NFL website: www.pro32.ap.org and www.twitter.com/AP_NFL 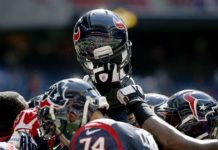