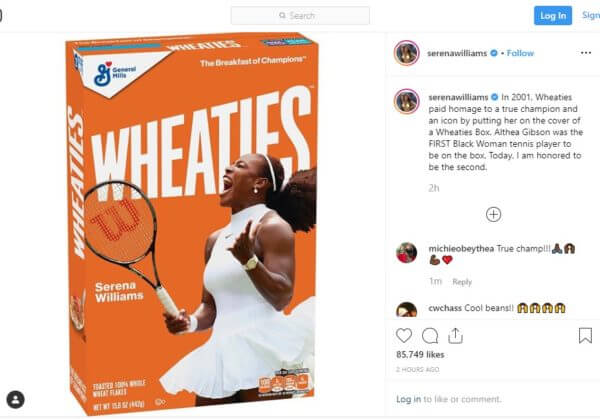 Serena Williams has been making history in professional tennis ever since she began, and now she’s done it again.

On Tuesday, the 23-time Grand Slam winner announced that she’ll be the next athlete to have her image on a Wheaties box, and she’s the second Black woman to be given that honor since legendary tennis pro Althea Gibson.

“In 2001, Wheaties paid homage to a true champion and an icon by putting her on the cover of a Wheaties Box,” wrote Williams on Instagram. “Althea Gibson was the FIRST Black Woman tennis player to be on the box. Today, I am honored to be the second. “

Besides the 23 Grand Slam singles titles, the Los Angeles native wracked up 14 Grand Slam doubles championships, as well as four Olympic gold medals. Williams also became the second black woman after Gibson to win the U.S. Open and she did it at just 17 years old.

But some might say her biggest accomplishment, which her sister Venus Williams is also responsible for, is inspiring black kids to take up tennis, both in and out of the inner city.

“I am so excited to be on the cover of the next Wheaties box,” said Williams in a press statement. “I have dreamt of this since I was a young woman and it’s an honor to join the ranks of some of America’s most decorated athletes. I hope my image on this iconic orange box will inspire the next generation of girls and athletes to dream big.”

Her fans had a lot to say about the honor afterward, and some said it was long overdue.

“Beautiful! I have no idea what took them so long, tho. Achievement unlocked!” someone wrote on Instagram.

“I might go buy a box! Especially if they will make me look like a Beautiful Queen! 🔥Yes a Champion!💕 Congratulations!💪🏾” someone else wrote.

“I don’t even eat Wheaties but I’m buying a box !” another fan commented.