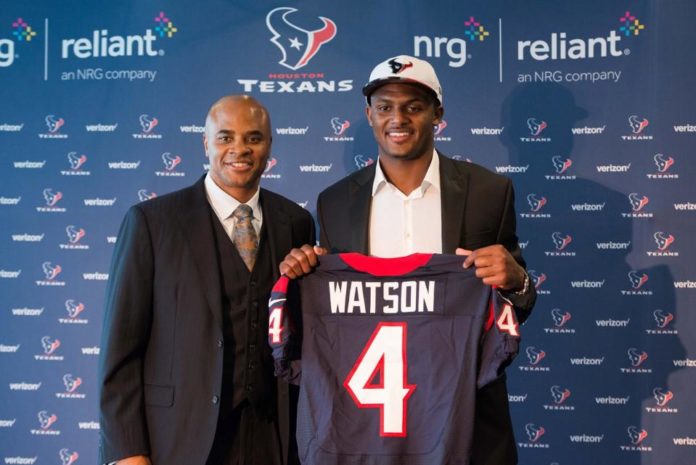 Classify this under the heading, never saw it coming: Texan GM Rick Smith orchestrated a spectacular draft day trade that resulted in the selection of Clemson quarterback Deshaun Watson. Houston traded away its first-round pick for 2018 to the Cleveland Browns and switched places with the Browns, allowing the team to move from the 25th pick to the 12th.

The selection of Watson satisfies the franchise’s greatest need, a young quarterback with the potential to elevate the team to the next level. In addition, he has the type of image and character to be the face of the franchise.

Watson’s college resume is as good as it gets. He guided Clemson to consecutive College Football Playoff appearances and the school’s second national championship (2017). He led Clemson to 28 wins over his final two seasons (2015-16).

He’s a two-time Heisman Trophy finalist, finishing third in 2015 and second in 2016 to become first ACC player to finish in the top three of the voting on multiple occasions. Watson is also two-time recipient of the Davey O’Brien Award as the nation’s top QB, one of only four quarterbacks to win the award twice.

When you compile a resume that impressive, employers pay attention. Rick Smith and the Texans were hiring.

“[Watson is impressive] when you look at the young man and you study his history and the things that he has had to work through, the adversity that he’s worked through, the human being that he is first of all,” Smith said.

“Then when you look at his history as an athlete, you have a guy who’s a winner. He has that winning gene. He was a high school Gatorade Player of the Year and a state champion in high school. He’s a national champion. He throws for almost 70 percent of his passes…When we watched him in the building here around our players, it was pretty apparent that the leadership trait that he has is infectious.”

Head coach Bill O’Brien explained what sold him on Watson.

“He’s a winner – 33-5 as a college quarterback, a national champion,” said O’Brien, who recalled meeting Watson at the NFL Combine.

“I felt like he was a guy who answered the questions very honestly, had a good memory, a good recall of specific plays that happened in his college career,” O’Brien said.

“When he came here to meet with us here, he met with our whole offensive staff and it was impressive. He was able to learn plays, teach the plays back to us and talk about his own. Like Rick [Smith] said, with his history and his ability to overcome adversity, he’s a very impressive guy.”

For Watson, the post draft experience has been a whirlwind.

“My emotions have been sky-high,” he said. “Ever since I got the call, tears have just been coming out of my eyes. It’s surreal to think that I’m officially an [NFL] player. Just to be able to be on this stage and be here with these guys and with this great organization, it’s special.”

Watson feels it’s important that in a new environment people understand his approach to the game.

Watson is known as much for his character off the field as his ability on the field, and credits his mother for molding his personality.

“She made sure that I was the right person off the field – that I was a man, I was taking care of my responsibilities, being disciplined and just being the guy that I am,” Watson said. “The way I treat people is the way they’re going to treat me, so I have to carry myself the right way. My mom, she’s my rock. She’s the one who raised me. A single-parent mom of four kids and the struggles that we went through, it was tough.”

Houston welcomes the new face of the Texans franchise, from Gainesville by way of Clemson University, Derrick Deshaun Watson.