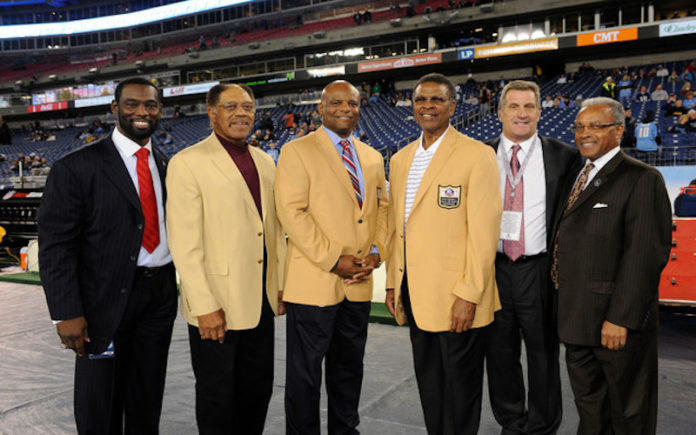 Major props to the Houston Texans for hosting a ceremony at halftime of the San Diego game for two NFL Hall of Famers with ties to Houston. Elvin Bethea and Kenny Houston, both former Houston Oilers, were presented with newly designed HOF rings by David Baker, Pro football Hall of Fame president.

Bethea, defensive end, was a 3rd round pick to the Houston Oilers from North Carolina A&T in 1968. He played 16 season, all with the Oilers. An eight-time Pro Bowl selection, Elvin played in 210 games during his lengthy career in Houston. He was named first- or second-team All-AFL/AFC six times and second-team All-Pro four times. He was inducted to the HOF in 2003.

Houston, free safety, was a 9th round pick to the Oilers from Prairie View in 1967. After excelling for six years with the Oilers, Ken was traded to the Washington Redskins for five veteran players in 1973.

He was selected for either the AFL All-Star game or the AFC-NFC Pro Bowl 12 straight seasons from 1968 through 1979. In 14 years Kenny had an NFL record 9 interceptions for touchdowns, 21 fumbles recoveries and scored 12 touchdowns, nine on interceptions and one each on a punt return, a fumble return, and a blocked field goal return. He was a member of the 1986 class into the Hall of Fame.