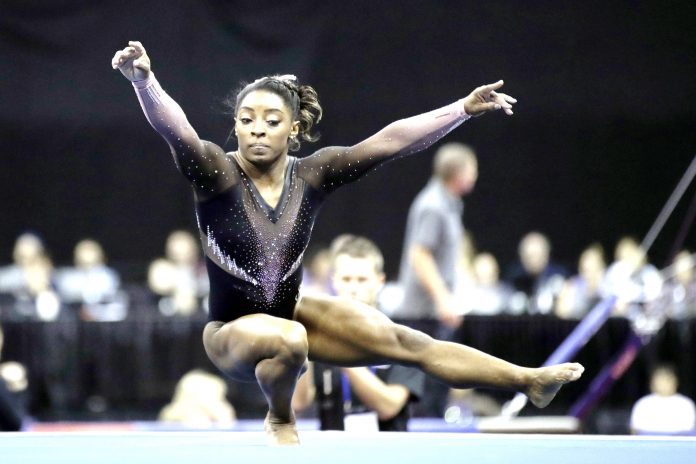 What a difference a year makes. When 2019 began, Chris Paul still played with the Rockets, we hadn’t heard much from Colin Kaepernick since his Nike endorsement deal and Tiger Woods hadn’t won a major tournament in years. All that changed in what has been another busy year in the college/pro sports worlds. Let’s take a look at the top stories.

Spring native Simone Biles again demonstrated why she’s the world’s top gymnast. In July, she captured gold at the U.S. Classic, maintaining a six-year winning streak. In August, she proved her dominance by winning the U.S. women’s gymnastics championships. Even though she had an off night on the opening night, she still ended up in first place. “I still get really frustrated because I know how good I am and how well I can do,” she said. In October, she won her 25thworld medal at the World Championships in Stuttgart, Germany, and became the most decorated gymnast ever.

The Houston Astros hoped to become World Series champions for the second time in three years but lost Game 7 to the Washington Nationals by a 6-2 score. The Astros carried a 2-0 lead into the seventh inning before the walls caved in on their pitching staff. They won Games 3, 4 and 5, all in D.C. For the Nationals, the matchup was historic, marking the first time the team reached the World Series. The Astros clinched the American League championship by beating the New York Yankees and had the best record in Major League Baseball – 107 wins and 55 losses.

Two months after a series-ending playoff loss to the Golden State Warriors, the Rockets made headlines again by trading Chris Paul to the Oklahoma Thunder for Russell Westbrook in a swapping of top point guards. The Thunder also received first-round picks in 2024 and 2026. The trade reunited Westbrook with James Harden. They were Thunder teammates for three seasons, the last of those being the 2011-12 campaign when Oklahoma City lost to Miami in the NBA Finals. Westbrook said he was ready to do whatever was necessary to make the move to Houston work.

Tiger Woods rallied to win the Masters for the fifth time, a comeback that went well beyond the two-shot deficit he erased before a delirious audience that watched memories turn into reality at Augusta National. It had been nearly 11 years since he won his last major and 14 years since the green Masters jacket was slipped over his red shirt. He closed with a 2-par under 70 for a one-shot victory. Woods became, at 43, the oldest Masters champion since Jack Nicklaus won the tournament at age 46 in 1986.

When the University of Houston basketball team beat Ohio State 74-59 in a second-round Midwest Region game, it marked the first time in 35 years that UH reached the Sweet 16. It was the Cougars’ 33rd win of the season, breaking the school’s season record set by the 1983-84 team. UH went on to suffer a heartbreaking loss to Kentucky, falling 62-58. UH coach Kelvin Sampson was proud of what his team accomplished. “Sometime in coaching you just get blessed with a great group of kids. I mean a great, great group of kids. It’s such a blessing and an honor for me to coach these kids this season, and I say ‘thank you’ to them for letting me go along on the ride…”

The Texans began the new year as winners of their third AFC South division title in four years. The team took an 11-5 regular season record into the wild card game with their division rivals, the Indianapolis Colts. Indianapolis gave Texan quarterback Deshaun Watson fits throughout the game, sacking him three times. The Colts won 21-7.As the new season began, the Texans were favored towin the AFC again, especially after the sudden retirement of Indy quarterback Andrew Luck. Heading into December, the Texans were tied with the Tennessee Titans for the division lead.

Prairie View A&M University (22-12) topped Texas Southern University (21-13) in a thrilling 92-86 contest to win the 2019 Toyota SWAC Basketball Tournament. Gary Blackston of PVAMU was named tournament MVP. Other all-tournament team members were Dennis Jones and Devonte Patterson of PVAMU and Jalyn Patterson and Jeremy Combs of TSU. The win took coach Byron Smith and the Panthers to March Madness for the first time since 1998. PVAMU was defeated by Fairleigh Dickinson 82-76 in the first round of the NCAA Tournament.

The NFL scheduled a workout with former pro quarterback Colin Kaepernick in Atlanta. Kaepernick has been out of the league since 2016, when he protested police brutality by kneeling during the national anthem. Kaepernick ended up holding his own workout 60 miles from the Atlanta Falcons’ facility where the session was originally scheduled to take place and the league said he was a no-show. Kaepernick’s team said they believed the NFL cared more about creating the impression it wanted to give him a chance than actually giving him a legitimate opportunity. NFL Commissioner Roger Goodell stood by the legitimacy of the workout. “It was about opportunity, a credible opportunity.” Goodell said. “He chose not to take it, and I understand that.”

College athletes closer to getting paid

The NCAA took a major step toward allowing college athletes to cash in on their fame, voting to permit them to “benefit from the use of their name, image and likeness.” The nation’s largest governing body for college sports and its member schools now must figure out how to allow athletes to profit – something they have fought against doing for years – while still maintaining rules regarding amateurism. The NCAA Board of Governors directed each of the NCAA’s three divisions to create the necessary new rules and have them in place no later than January 2021. The move came after California opened the way for college athletes to hire agents and make money from endorsement deals.

Younger stars Naomi Osaka and Coco Gauff and veteran Serena Williams were players to watch in 2019. Ranked third in the world, Osaka began the year with a second straight Grand Slam title at the Australian Open. Osaka, who was born to a Japanese mother and a Haitian father, will give up her U.S. citizenship to represent Japan in the Tokyo Summer Olympics next year. Gauff, a 15-year-old from Georgia, was on fireat Wimbledon, knocking out five-time champion Venus Williams in the first round before losing in the fourth round. In the U.S. Open, she was defeated by Osaka in the third round. Serena Williams advanced at Wimbledon before being defeated in the finals. Though Williams lost her bid for what would have been her sixth U.S. Open Singles title, her legacy as the greatest tennis player of all time remained intact.