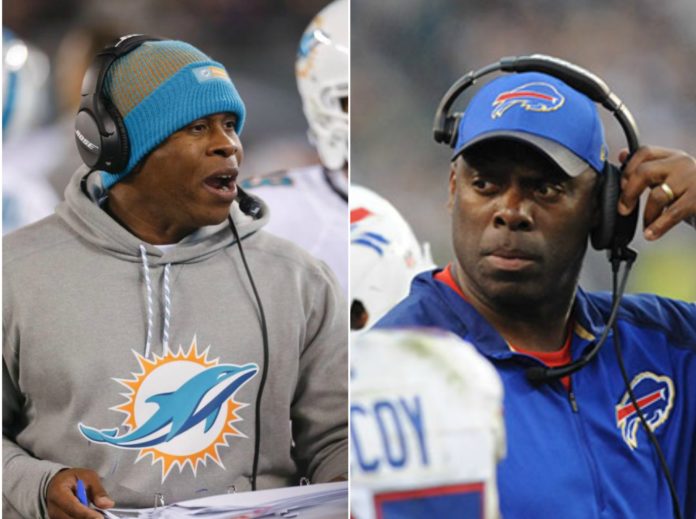 This NFL offseason has seen six head coaching vacancies. Over the previous five hiring seasons, from 2012 to 2016, 22 first-time head coaches were hired. The only minority, former Arizona Cardinal defensive coordinator Todd Bowles, landed the top spot with the New York Jets in 2015.

“The thing that was extremely gratifying is that there were no token interviews this year,” said John Wooten, chairman of the Fritz Pollard Alliance (FPA), who has worked tirelessly for diversity in executive and head coaching opportunities in the NFL since 2003. The FPA promotes candidate talent development for coaching, front office executives and scouting staff throughout the NFL.

“Several of the guys had two and three interviews,” Wooten said. “We saw the process operate as it should.

“In addition, I was pleased with Commissioner [Roger Goodell] and the way the league incorporated the candidates who had been vetted from our ‘ready’ list to the teams who had vacancies,” Wooten said.

Vance Joseph, a University of Colorado alum, heads to Denver after serving a stint as defensive coordinator of the Miami Dolphins. He has local ties, serving as the secondary coach for the Texans under Gary Kubiak from 2011-2013.

Joseph was elated to receive the opportunity in Denver and make history as well.

“As far as being the first Black head coach here, I’m honored, I’m proud,” Joseph said during his introductory news conference. “Hopefully going forward, that part is not considered any longer.

“As we go along in the future, it shouldn’t matter what color you are,” Joseph said. “If you can do the job, they should hire you. But I understand it, and I’m proud and humbled by it, and moving forward, I want to do a good job so the next guy can get his opportunity.”

John Elway, Broncos executive VP of Football Operations/GM and former star quarterback, summed up what attracted him about Joseph.

“I’ll say this: he’s very smart, he’s an ex-quarterback. You think all he knows is the defensive side, but he’s aware of what we need to do on the offensive side, too. I think that’s why the combination is tremendous,” Elway said.

Anthony Lynn takes over the Charger top spot after serving as offense coordinator/running backs coach and interim head coach of the Buffalo Bills. He’s a Texas native who grew up in Celina and was a standout running back at Texas Tech.

Professionally, he was an undrafted free agent, playing six years in the NFL between the Broncos and the 49ers. Lynn earned a pair of Super Bowl rings as a Bronco in 1997 and 1998.

John Spanos, Chargers president of Football Operations, explained what sold them on Lynn.

“One thing that’s very clear about Anthony Lynn is he’s a leader,” Spanos said. “As you can tell, I am very excited about the leadership qualities he’s going to bring to our team. He is really going to communicate and connect with our players.

“He’s had a number of great coaching influences in his life and as a former player who won two Super Bowls, Anthony knows first-hand what championship pedigree is all about,” Spanos said.”

For Lynn, the opportunity to be an NFL head coach is a dream that became reality.

“I’m having a hard time even putting into words how excited I am to be the new head coach for the Los Angeles Chargers,” Lynn said. “This is really a dream come true.

“I want all of our fans to know that we’re going to start by putting together a great staff and we’re going to put together a team with the heart and will of a champion. I know there’s a lot of work to be done and I’m going to give everything I have to the Chargers, the Spanos family and the city of Los Angeles.”