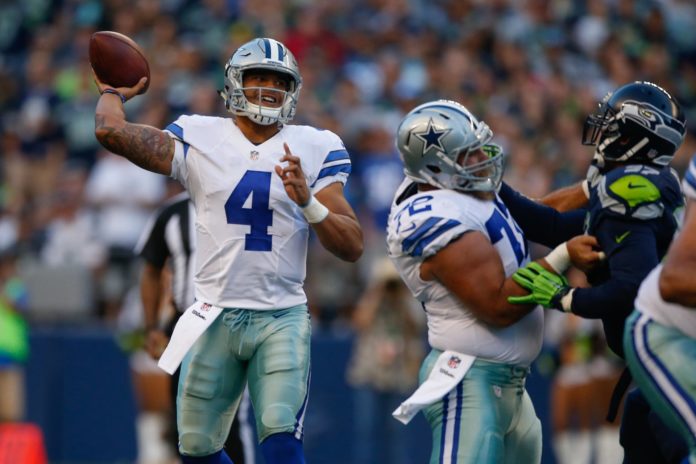 Prescott, a fourth-round pick (135th  pick overall) was expected to compete with a group of also-rans and career back-ups as the top understudy for oft-injured starter Tony Romo. Instead, a series of preseason injuries, including a compression fracture to a bone in Romo’s back, have moved Prescott to the head of the quarterback class.

The Cowboys were 4-12 in 2015, with all of the losses occurring in games that Romo missed because of injury. Fans feared déjà vu with Romo missing the first eight weeks of this season. Fortunately, the difference in 2016 is the emergence of rookie QB Prescott.

This season the Cowboys are 4-1 and currently sit at the top of the NFC East division and they can attribute so much of that to the play of Prescott.

Prescott has run the offense flawlessly, impressing the Cowboy staff with a level of poise and maturity rarely seen in a rookie. Just as important, he has minimized turnovers that often plague inexperienced quarterbacks. He recently set a rookie record for 135 passes thrown without an interception, a record that the very reserved rookie quarterback dismisses.

“Some good fortune goes into that,” Prescott said. “There have been some passes that have been tipped or been in the defender’s hand with a shot to intercept it. It’s a record. They’re meant to be broken.”

Regardless of what Prescott thinks, head coach Jason Garrett is appreciative of what the back-up quarterback has accomplished.

“He’s just continuing to execute week in, week out, and he’s growing with the experience he gets,” Garrett said. “He goes about it the right way. We’re lucky to have him.”

For Prescott, his success has not been a result of luck, but is a manifestation of the preparation he puts in, on and off the field.

“It comes from the preparation I put in throughout the week at practice,” Prescott said. “Studying the team and studying the game plan allow it all to come together. Our offensive coordinator coach [Scott] Linehan does a hell of a job calling plays and allowing us to feel comfortable and allowing us to do what we are good at.”

The success the team is enjoying with Prescott under center has caused many NFL experts to ponder if Romo automatically steps back in as the starter. Romo is scheduled to return from injury around week eight (Oct. 6). How can Dallas think of moving Prescott to the bench if the ‘Pokes are still leading their division?

CBS NFL analyst Tony Gonzalez wondered out loud what everyone has been thinking.

“If Dak is continuing to have success there’s a chance that Jason Garrett could lose his locker room if he makes a change,” Harrison said. “It’s not about one individual player; you have accountability to the entire locker room.

“You lose respect for your coach if…you’re winning and things are going well and you want this guy [Prescott] to stay and all of a sudden they make a change,” Harrison said.

Like a seasoned veteran, Prescott refuses to let the hype engulf him. How much longer will he be starting? Only time will tell. His focus is on his next opportunity to play the game.

“We have to take it one game at a time, one week at a time and one day at a time,” Prescott said. “We’ve done a great job of putting the past behind us, if it’s a win or a loss, and just focusing on what is in front of us.”