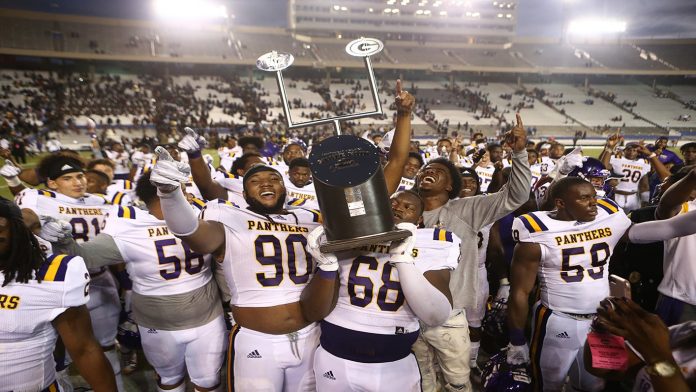 According to most pundits the road to the SWAC West division and subsequently to the conference championship runs through Grambling, which stands to reason since the Tigers have made shambles of the competition, winning the championship in back-to-back years (2016-2017).

If that is indeed the case, the Prairie View A&M University Panthers have made a significant step toward a division crown by defeating the defending champs 22-16 in the State Fair Classic.

The Panthers (3-3 overall, 2-0 SWAC) defeated Grambling (1-3, 1-1) for the first time since 2013 and ended their 26-game SWAC winning streak, which began in 2015. For first-year head coach Eric Dooley, a former Grambling offensive coordinator, the win was a special one.

“We had some challenges and we had some opportunities to do some things, but we knew it wasn’t going to be easy by no stretch of the imagination,” Dooley continued. “I have a lot of respect for the coaches on the other side because I do know them well and I understand their body of work. It was a hard-fought contest. I think more than anything, we gave fans the opportunity to see two good football teams compete.”

Known for their explosive offense, it was the Panther defense that keyed this hard fought victory. The Panthers’ defense kept Grambling out of the end zone until the fourth quarter, registering nine sacks, including 2.5 by DE Willie Green.

“I think the game plan that those guys had going in was good and we studied some good film and had the opportunity to make some adjustments,” Dooley said. “It’s not very often you get that opportunity [for a high number of sacks].

“The guys played well and played hard. Hats off to the defensive coaches for putting a great game plan together and executing it. Of course, everything didn’t go as planned, but I thought the kids played hard for the whole game. That was a great job on that side of the ball.”

Offensively, PVAMU quarterback Jalen Morton completed 23-of-34 passes for 269 yards with three touchdowns and one interception and also rushed 13 times for 62 yards. Dawonya Tucker, the leading rusher in all of Division I football, rushed 19 times for 72 yards and also caught three passes for 89 yards and a touchdown.

For their efforts against Grambling, Green and Morton were named SWAC Defensive and Offensive Players of the Week respectively. For Morton it was his second consecutive week receiving the conference honor.

“Willie Green came out and played one of his better games of the whole year,” Dooley added. “My hats off to him because he’s been working hard. He’s a senior, and a guy who goes to work every day. He’s not going to say a whole lot. He just works.”

The Grambling win is a huge victory for the Panthers, but with five conference games remaining Dooley knows it’s not time for a parade just yet.

“It’s an accomplishment, but it’s a long season and this is just a part of it,” Dooley said. “This was a huge win, now we’ve just got to continue to grow and get better each game.”

After playing six consecutive road games to begin the season, PVAMU will enjoy a bye before hosting Southern on Saturday, Oct. 13at 5 p.m.