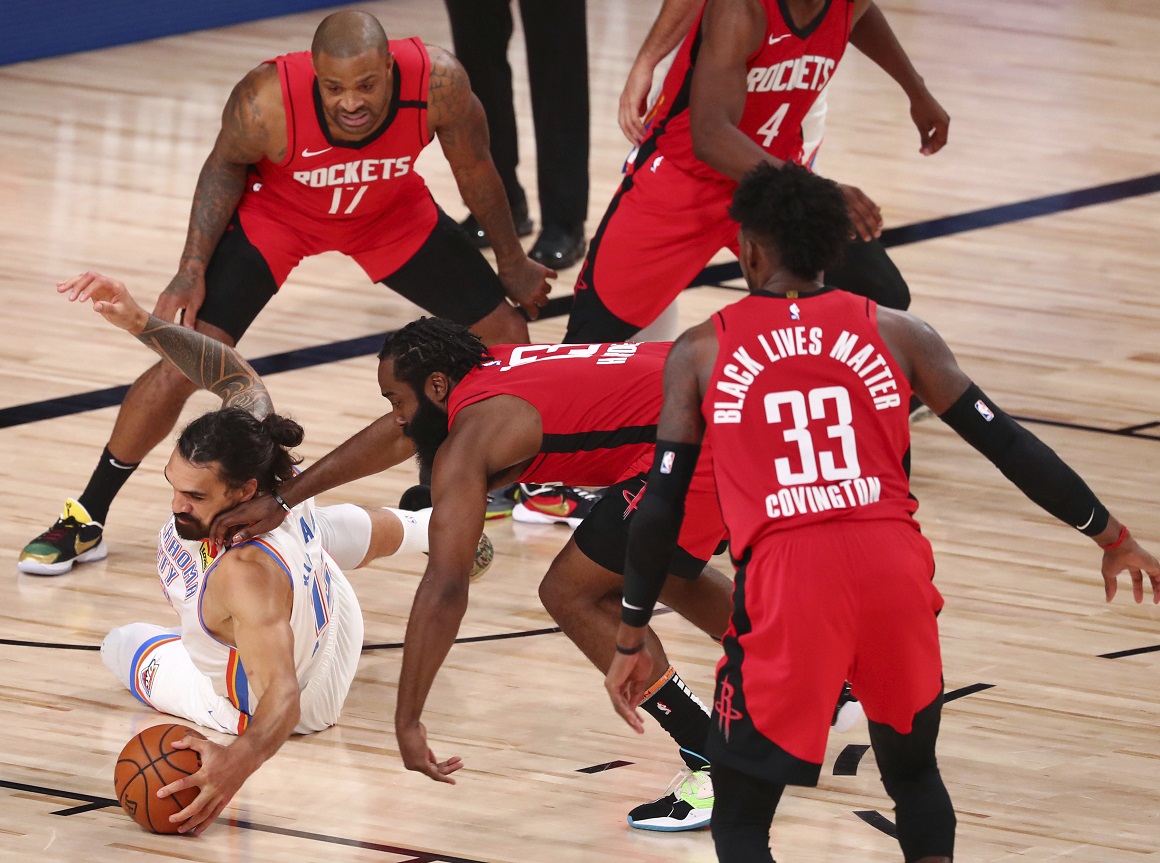 It’s without question the Rockets need contributions from lots of different places with Russell Westbrook sidelined for an unspecified time during this opening round of the playoffs.

But when the Rockets’ other star, James Harden, inexplicably has an off shooting game like he did in Thursday’s Game 2 of their first-round playoff series against Oklahoma City, there was a need for even more contributions from more role players. And that’s what the Rockets got with players like Danuel House, Eric Gordon, P.J. Tucker, Jeff Green and Austin Rivers all coming up big in spurts in helping lift the Rockets to an 111-98 win over Oklahoma City to improve to 2-0 in the series.

Harden finished with a human-like 21 points on 5 of 16 shooting from the field and 2 of 11 from 3-point range, while House came through with 19 points and nine rebounds, Gordon and Green added 15 points each and Tucker contributed 14 points.

“That’s what we’ve got to do,” said Rockets coach Mike D’Antoni, whose team will play Game 3 on Saturday. “People are going to load up and there will be nights like this where James will start and then get into a hole, but that’s when the other guys have to step up and they did. I thought that was impressive.”

Rivers got it started in the first half with his 11 points but in the critical second half, the role players helped rally the Rockets and ultimately deliver the critical win. Harden was on the bench early in the fourth quarter when the Rockets went on a 14-0 run to set the stage for victory.

“That was the game right there,” said Harden, whose team limited the Thunder to just 39 points in the entire second half. “The guys just took it upon themselves to guard and we sensed that Oklahoma City was getting tired and we just kept pressing the gas on them. That was a game changer for us. Shout out to Jeff, Tuck, House and all of the guys who were in during that fourth quarter run. They made some big plays defensively then made some big shots.”

During Tuesday’s playoff opener, Green and Gordon came up with big contributions. A few more players got into the act during Thursday’s win.

Harden says it has been like this all season.

“As you get deeper you need your team,” he said. “You need guys to play well, you need guys to make big shots and big plays defensively and offensively. Tonight was a start but it’s been that way. Guys have played well and tonight I didn’t shoot the ball well so it just looked like it was more highlighted but my teammates have been playing well all year. They’ve been after it and tonight was huge for us.”

With contributions like the Rockets have received and being up 2-0 in the seven-game series, it certainly seems that some of the urgency of getting Westbrook back into the lineup quickly has been eased. Westbrook has missed the first two playoff games with a quad injury and there has been no timetable set for his return.

“If you are down 0-2 then that puts you in a different position as 2-0,” D’Antoni said. “But we are going to be good with Russ, he’s too valuable to just throw out there no matter what the situation was. He is going to be well and we can’t wait to get him back but this does help.”