Deshaun Watson and Bradin Cooks finally established a connection, the Texans defense created turnovers and was stout against the run and the Texans head coach was smiling on the sidelines and dancing in the postgame locker room Sunday.

The Texans also got their first win of the season in five tries – a 30-14 win over AFC South rival Jacksonville at NRG Stadium. Indeed, things are changing with the Texans one week after the team fired head coach and general manager Bill O’Brien and replaced him with 73-year-old Romeo Crennel for at least the remainder of this season.

“That was huge. The win was huge,” said Crennel, the long-time defensive coordinator who became the oldest coach to win a football game in NFL history. “You know, particularly the way that we started the season, not winning a game out of four, and then being able to come here at home and play a tough game, hang in there.”

The players were certainly pumped to finally see their hard work yield a positive result this season. 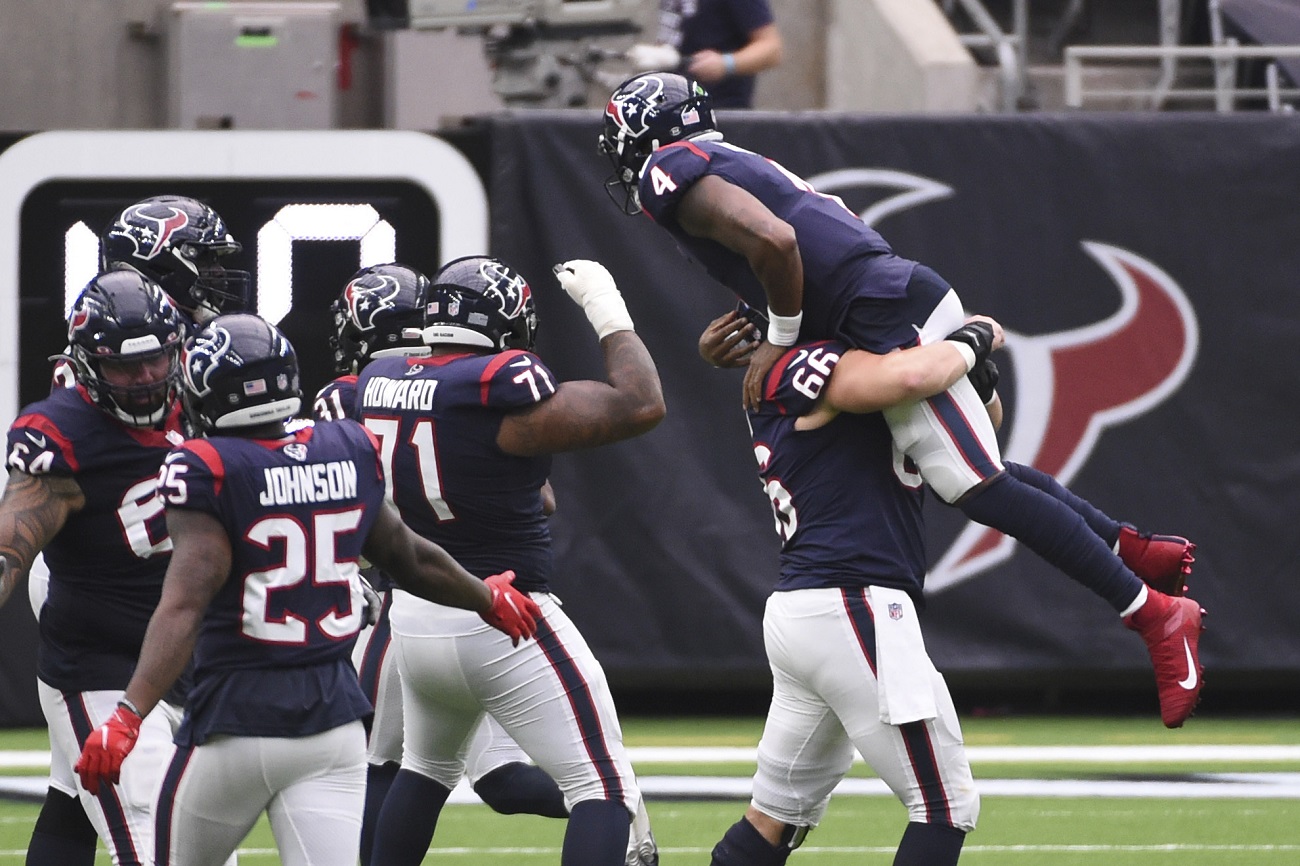 Much of the credit is being given to Crennel, who not only had his team ready to play but they seemed to have a bounce and resilience that had been missing all season long. It was evident from early on that the Texans were playing different after shutting down the Jaguars rushing attack following the first series and the offenses ability to shake off some early struggles.

Now the Texans are looking to build off what they did Sunday as they begin the long road back to being competitive in the AFC South race.

“We’ve just got to continue to have fun and continue to build the momentum, continue to keep guys healthy, continue to prepare and just be loose,” said Watson, who completed 25-of-35 passes for 359 yards and three touchdowns. “Not too loose, but at the same time just have fun. Regardless of what happens, good or bad, because each team is very, very good, and each team is going to make plays.”

But what was impressive Sunday was the Texans ability to make plays, particularly in the passing game. For the time this season Cooks and Watson seemed to be on the same page and not surprisingly Cooks finished with his best game in a Texans uniform.

Cooks finished with eight catches for 161 yards and a 28-yard touchdown reception on a short slant that sealed the win in the fourth quarter.

“I think it was just more so we all were getting involved,” Cooks said of what was different for him and Watson against Jacksonville. “It was just one of those things, I wouldn’t say anything was different. The ball happened to come my way. Everyone was making plays today, and when you have that, it seemed like everything just goes well for everyone.”

The Texans got big performances from a lot of places, including from running back David Johnson, who also had his best day as a Texan with 96 rushing yards. Watson also completed big passes throughout the day to tight end Darren Fells and receivers Kenny Stills and Will Fuller.

The offense also overcame a couple interceptions by Watson, which in the past might have zapped the confidence of the team.

Defensively, the team pressured the quarterback much of the day, created two turnovers and kept running back James Robinson in check after some early big runs.

“It was great. We had a lot of fun today,” Watt said. “We had a lot of fun offense, defense, special teams. Everybody pitching in. Whenever something went wrong, the other group was ready to step up and make a play to make it right. Nobody hung their heads.”

Much of that can be attributed to the looseness Crennel and his staff had the players playing with Sunday.

“You know, I told them that they were better than the record showed going into the game,” Crennel said. “And I think that they believed that to a degree, and then they won the game, so now they might believe everything I tell them.”