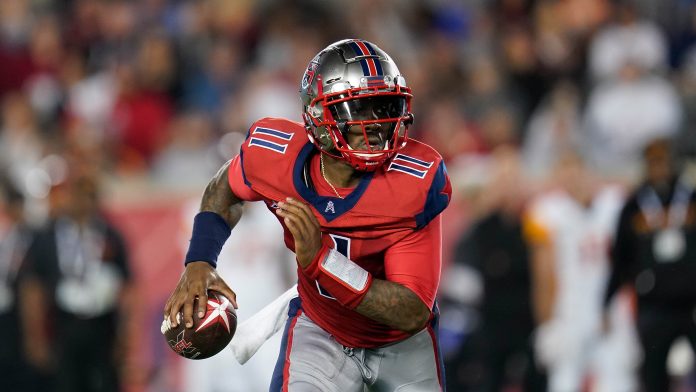 It should come as little surprise that Houston Roughnecks breakout star P.J. Walker would be a coveted commodity by the NFL once the XFL season was over.

The Seattle Seahawks, Denver Broncos and Arizona Cardinals all came calling, but his former Temple coach, Matt Rhule, won out when Walker agreed to a two-year free agent contract to join the Carolina Panthers as a backup quarterback.

While backing up similar quarterbacks like Russell Wilson and Kyler Murray in Seattle and Arizona, respectively, had intrigue joining Rhule in his first season heading up the Panthers seemed to make the most sense.

Rhule and Walker won together at Temple and Rhule knows exactly what he is getting in Walker and how to get the best out of him.

And Walker will know the offense and the verbiage better than even anticipated starter Teddy Bridgewater, who was recently signed by the Panthers to replace Cam Newton.

Walker had spent parts of the past few seasons as a practice squad quarterback with the Indianapolis Colts, but the 5-foot-11 quarterback lacked any meaningful snaps and playing experience during that time.

Walker, however, finally got those opportunities in his debut with the rebooted XFL this season. And he did not disappoint. The dual threat quarterback showed his ability to lead a team with minimum errors, guiding the Roughnecks to a 5-0 start while completing nearly 65 percent of his passes for 1,338 yards and throwing for 1,338 yards, 15 touchdowns and just four interceptions and running for another 99 yards and a touchdown.

In likely his only XFL season, Walker had become the league’s best player in its season that was shortened due to the coronavirus pandemic. When the XFL canceled its season earlier this month it said that players could immediately start signing with NFL teams.

It wasn’t a surprise that Walker would be the most coveted among the XFL players.