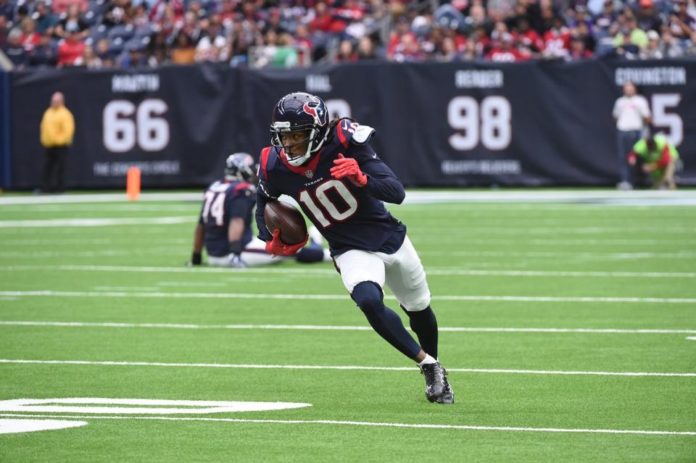 In a league filled with exceptional receiving talent, Texans wide out DeAndre Hopkins continues to show that he is among the NFL’s elite.

Hopkins, who in his fifth season from Clemson, shows that lightning can strike twice for a franchise that recently inducted receiver Andre Johnson as the initial player into its Ring of Honor. As Johnson’s successor at the receiver position, Hopkins has created an identity throughout the NFL as a big play simply waiting to erupt.

Hopkins was rewarded with a new contract at the beginning of the season that includes $49 million in guaranteed money. The deal makes him the highest paid wide out in the league.

Unlike some NFL receivers who preen for the cameras with outlandish gimmicks, Hopkins is a quiet, confident, low-key sort who believes action speaks louder than words.

“I try and let my play speak for itself,” he said. “I want to be the best, I feel I am the best. I try to prove it every day on the field. I try to be consistent, no matter the circumstances around me. That’s the way I play the game.”

One of the things that gives testament to Hopkins’s ascent is his ability to remain productive in the wake of a revolving door at quarterback in his five years with the Texans. He has caught passes from no fewer than 10 different QBs in his career. Undeterred, Hopkins has made them all look good.

“We’re professional athletes,” Hopkins said. “Speaking for the receivers, that’s our job, no matter who’s at quarterback. We catch the football and don’t really make excuses about who’s back there.”

Hopkins takes a cerebral approach to his craft, knowing there are many elements that go into making a reception.

Hopkins’s nine touchdown receptions lead the NFL. His eight receptions for 224 yards and a touchdown against the Seahawks is among the most productive outings of the season and was also the most ever by a player in a road game at Seattle.

Head coach Bill O’Brien has come to expect big numbers from No. 10.

“He’s on track for big numbers and that’s what you expect from him,” O’Brien said. “He’s got great hands, he’s a great route-runner and he’s got an incredible ability on the sideline, which is huge for us. We definitely move him around because of his intelligence and his ability to know all the positions.”

O’Brien also has also seen the influence playing with a future Hall of Famer like Andre Johnson has had on Hopkins’ game.

“DeAndre is always out at practice running the routes the way we ask him to,” O’Brien said. “Are they different in some of their skill sets and some of the things they do? Yeah, but there are similarities in their size and their hands and their toughness and things like that…When you’re in the same meeting room and practice field with a Hall of Fame receiver, that’s a good thing for you.”

Quarterback Tom Savage has observed Hopkins take his game to another level.

“I think he’s taken a huge step forward this year and that’s saying a lot from where he’s been in the past,” Savage said. “He’s the ultimate competitor; he wants the ball. I can’t say enough about him. He makes my job so much easier. Throw it up to him and let him make a play.”

As the elder statesman guiding a group of young receivers, Hopkins now has the leadership role that Andre Johnson once held.

“I’ve been a leader with the wide receiver group for two years now, three years,” Hopkins said. “I’ve kind of been vocal but I like to lead by example. Go out there and make plays. But when there’s things that we need to work on of course we’re going to work on them.”

Wide out Bruce Ellington has witnessed Hopkins’ leadership by example

“It starts at practice,” Ellington said. “[Hopkins] comes out every day working hard. The catches he makes in games we see every day in practice. He loves making plays and being a playmaker. Seeing him in practice motivates me. Eventually I want to be one of the best in the league like him.”