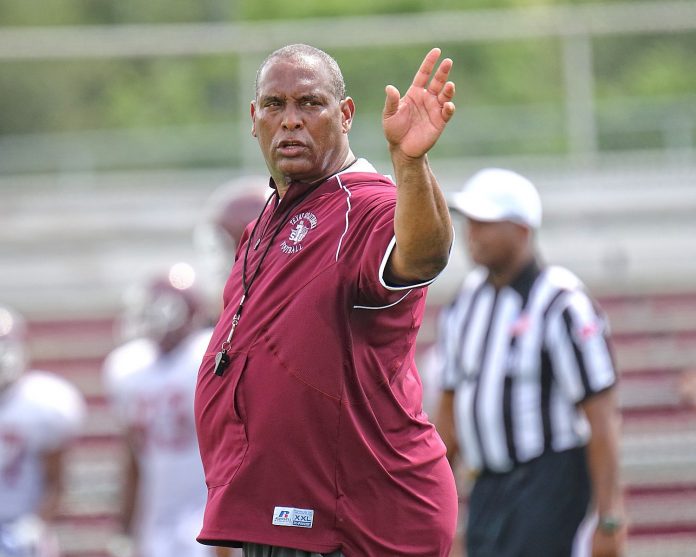 It has been a tough two-year stint for Texas Southern University head football coach Michael Haywood. With a record of 6-16 in two years, it was hardly the start he anticipated.

Entering year three of the Haywood regime, the Tigers have drawn a collective line in the sand and declared that winning at TSU resumes in 2018. Their mantra is “by any means.”

The Tigers haven’t posted a winning season since 2000. NCAA sanctions wiped out wins during the 2009 and 2010 seasons, including the conference championship in 2010. To say that TSU is overdue in the win department is an understatement.

Haywood was brought in to right the ship for the Tigers. His resume includes an impressive turnaround stint at Miami of Ohio. In his first year there the Redhawks were 1-11 (2009), but exploded in 2010, finishing with an 8-4 record in his second season and a MAC East title.

Things have not turned around as quickly at TSU. Entering year three Haywood needs to get to at least .500 in the win column to keep his job secure.

For the Tigers to find success in 2018 they must solve the revolving door at the quarterback position. TSU started three players under center, including Dominic DeLira, Jay Christophe and Elijah Odom, with all of them attempting between 65 and 122 passes over the course of the season. Entering 2018, DeLira and Odom have both departed.  Tulane transfer Glen Cuiellette has emerged as the starting quarterback after a spirited competition with Christophe.

Senior running back Brad Woodard has been a consistent contributor in the backfield. Terio Brown, Kevin Dove and Tylor Cook will help him shoulder that load.

The Tigers will feature a talented, but relatively unproven group at the wide receiver position.  Matt Butler, Bobby Hartzog, Tariq Buchanan, and Tren’Davian Dickson will all be counted on to exploit opposing secondaries.

The TSU Tiger defense expects to be strong if the offense can give them an opportunity to catch their breath. Darious Stapleton, Brelyn Goods, Tarrol Stafford and Jarryl Taylor will form a solid rotation at defensive end. Jimmy White, Ian Bronson and Ike Onwuasoanya will be expected to plug holes in the middle of the defensive line.

The linebacker group is solid with team captain Sean Jones heading a physical group of players. Patrick Howell, Demontario Anderson and Julian Marcantel will all be in the mix to punish SWAC offensive opponents

The secondary is talented and athletic with Kentarious Walker, Joshua Murray, Matthew Stephenson, Marquel Daigle and DeAndre Angelle holding down the cornerback and safety positions.