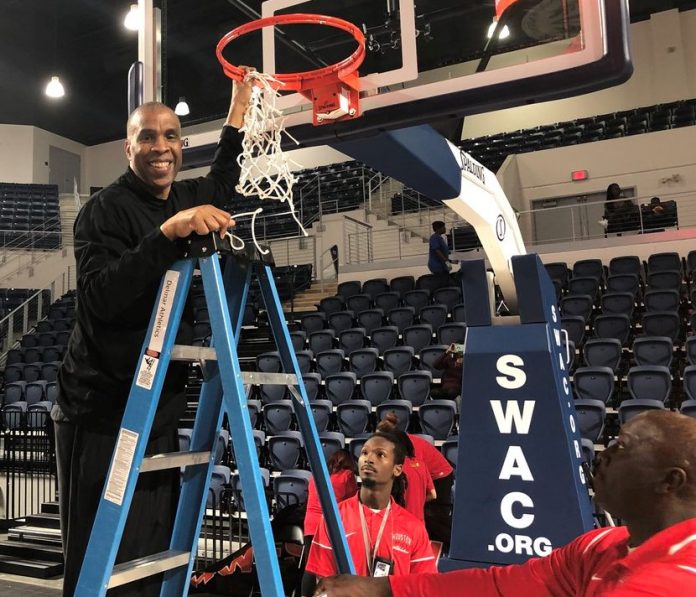 It’s been a rough 48 hours in the sports departments of our local HBCUs with both Texas Southern University and Prairie View A&M University taking major hits.

TSU announced that head basketball coach Mike Davis was leaving to take the job at Detroit Mercy. Meanwhile PVAMU athletic director Ashley Robinson has left “the Hill” and is headed back home to be the new AD at Jackson State.

“Since arriving at TSU Coach Davis has helped establish a basketball program that has consistently competed highly on a national level year in and year out,” said Charles McClelland TSU VP of Intercollegiate Athletics. “The championship and postseason banners that currently hang in our arena will only tell part of the story of the outstanding legacy he leaves behind.”

Detroit Mercy is a private university of approximately 5,000 students. They have gone 8-23 and 8-24 in the previous two seasons and haven’t had a winning record since the 2015-2016 season. They compete in the Horizon conference.

Ashley Robinson in five years at PVAMU has left an impressive record as athletic director. He oversaw the completion of the university’s state-of-the-art, multi-million dollar athletic complex.

Just as significant has been Robinson’s work on the academic side of athletics. Asassistant vice president of Athletic Compliance & Academic Advising at PVAMU in 2010, Robinson found 11 of the 18 sports had academic progress reports (APR) under the 900 mark. In one year under his leadership, that number went to three out of 18. After five years with Robinson as athletic director, all 18 are above the threshold for post-season eligibility and three sports have perfect scores of 1000.

“We had a good thing going at Prairie View,” Robinson said. “But [I look forward to] coming home and being a part of Jackson State and a tradition that really believes in the importance of athletics.” Robinson is a Jackson, Miss. native.