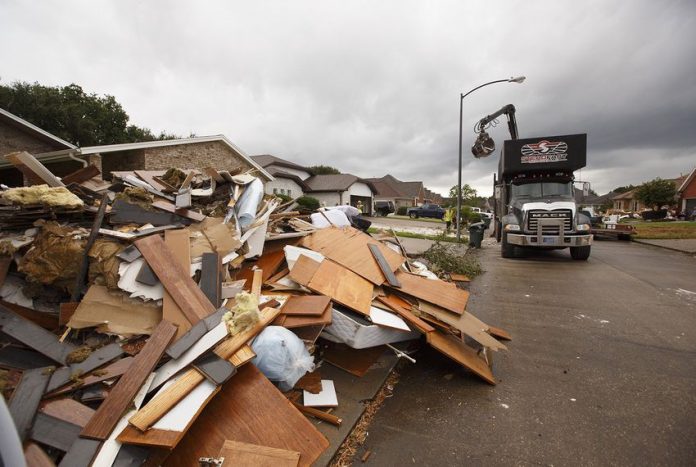 After all, the Duggans, both 62, had lived there for the better part of 20 years and the house had never flooded. Until one Sunday morning in late August 2017, when, after a night of heavy rain, George Duggan woke up his wife with a warning.

“He said, ‘Donna, I think we’re going to flood,” Donna Duggan said. “So we got packed up.”

The Duggans, and their Corgi, Cooper, were rescued from their home by volunteers just as rising flood waters approached their front steps. Had they known decades earlier that their home sat in a designated flood area known as Barker Reservoir, Donna Duggan said they would have thought twice about their decision to live there.

“We would never have bought it,” she said of the house that would eventually flood with two feet of water and require months of cleanup and renovation.

Starting Sept. 1, the state will require homeowners to disclose more information about flood risks and flood history before they sell their property. Previously, sellers in Texas had only been required to disclose whether their home was in a 100-year floodplain — an area, typically along a river or bayou, that has a 1% chance of flooding every year. Senate Bill 339, which Gov. Greg Abbott signed earlier this year, expands that disclosure to include whether the home is located in a 500-year floodplain, a flood pool, in or near a reservoir, and whether the home has flooded or may flood in a catastrophic event.

It’s a step toward transparency for homebuyers in Texas, but figuring out a property’s true risk of flooding can be tricky, and others are worried about the impacts to home and insurance prices.

“That’s going to pose difficulties for the seller,” said Mary Conner, a Houston attorney who specializes in environmental litigation. “Under Texas law, buyers can sue sellers under certain circumstances for certain failures to disclose.”

Daniel Gonzalez, director of legislative affairs for Texas Realtors, said it’s going to be best for sellers to be honest about the state of their homes — flood risks and all. But if a homeowner is unaware of risks and the home floods after they sell it, the burden of proof would be on the buyer.

“If a buyer does bring a lawsuit forward, they would have to prove the seller knowingly kept that information from the sellers disclosure notice,” he said.

For a homeowner to determine if they need to disclose flood risks, they could look up the location of their home relative to floodplains using FEMA’s map locator tool. But there’s one problem — floodplains aren’t always an accurate indicator of flood risks.

Amanda Bryant is director of operations for National Flood Insurance (an organization not affiliated with the federal government flood program) that works to inform homeowners of all the factors that could mean flooding for their property. Bryant said because FEMA maps don’t take into account land development, rainfall or changing weather patterns, they leave owners woefully uninformed of their true risks of flooding.

The maps, which are based on historical data, are supposed to be updated regularly, but that process often encounters delays. Harris County, for example, was supposed to have updated maps in May 2018, but is now scheduled to have an update in November. In March, FEMA announced it would change the way it determines flood risks — revamping methodology that hasn’t changed since the 1970s. The new method, called Risk Rating 2.0, should debut in 2020.

Thousands of Houston-area properties outside of the 100-year floodplains flooded during Harvey, according to city data. Many people didn’t know their homes sat within the boundaries of two reservoirs — Addicks and Barker — that had been built in the 1940s by the U.S. Army Corps of Engineers. But those weren’t the only people whose homes flooded.

During Harvey’s epic rain, as the water in the reservoirs got to a critical level, the Corps opened the dams from Addicks and Barker into Buffalo Bayou, flooding thousands of homes downstream of the reservoirs, many of which sat outside of designated floodplains.