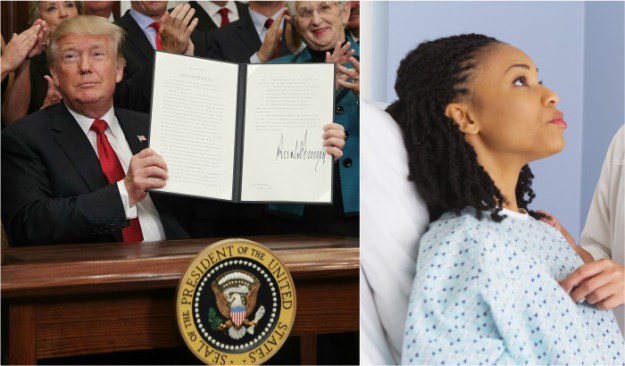 Unable to eliminate Obamacare with a Republican-controlled Congress, President Donald Trump is going after his predecessor’s signature program, dismantling the health care law by executive action. Trump is waging a war on healthcare, and Black people are among its casualties.

The president’s executive order ends the critical estimated $7 billion in subsidies to insurers so that millions of low-income Americans are able to afford coverage. After threatening to halt the payments for months, Trump has made good on his promise to cut the payments that help cover deductibles and out of pocket expenses.

These payments were expected to total $9 billion in the coming year and close to $100 billion in the next decade. Now, the marketplaces established under the Affordable Care Act could fall apart as insurers pull out and raise premiums, bringing chaos to the system.

This comes after another Trump executive order which he claims will increase competition and choice and bring more affordable health insurance to millions, but which critics say is designed to lure younger and healthier Americans away from the exchanges.

In a joint statement, Senator Chuck Schumer of New York and Representative Nancy Pelosi of California, said Trump “apparently decided to punish the American people for his inability to improve our health care system.”

“It is a spiteful act of vast, pointless sabotage leveled at working families and the middle class in every corner of America,” they two leading Democrats added. “Make no mistake about it, Trump will try to blame the Affordable Care Act, but this will fall on his back and he will pay the price for it.” Lawmakers from both parties had urged Trump to continue the Obamacare subsidies.

Obamacare has been a force to combat inequality, narrowing the gaps in health disparitiesfor poor, Black and Brown people. If the program is allowed to rot on the vine in the absence of an alternative such as single payer, Medicare for all or some universal solution, African Americans will surely suffer.

In the past, Republicans have justified the cutting of government programs to their white base on the grounds that people of color would suffer, or at least suffer the most. According to a report late last year from the Council of Economic Advisers, 20 million Americansgained access to health coverage through Obamacare. In absolute numbers, more whites have gained coverage from Obamacare than any other groups at 9 million.

However, people of color and the poor have benefited disproportionately from the healthcare law, and have much to lose. Three million Black adults who were once uninsured now have coverage because of the ACA, cutting the Black uninsured rate in half, according to data from the Department of Health and Human Services. Similarly, 4 million Latino and 1 million Asian American adults gained health insurance through the ACA. An additional 1.3 million uninsured African Americans qualify for coverage under the Health Insurance Marketplace known as the Obamacare exchange.

Black women, their children and their families are particularly at risk, facing substantial uninsured rate increases. Black women disproportionately suffer from a whole host of ailments such as high-blood pressure, uterine fibroids, cervical and breast cancer and diabetes, as well as sexual assault and domestic abuse. And they are more likely to be the sole providers for their home, with their children depending on their health coverage.

Fixated on dismantling the Obama legacy in its entirety, Trump is breaking up Obamacare piece by piece, and now he and the GOP Congress own it. Trump is a sociopath lacking empathy for others and caring only about his ego and his own needs. If he would allow millions of non-white hurricane victims to suffer and risk death through lack of government assistance, it is no wonder he would put millions in peril by eliminating their health insurance coverage.