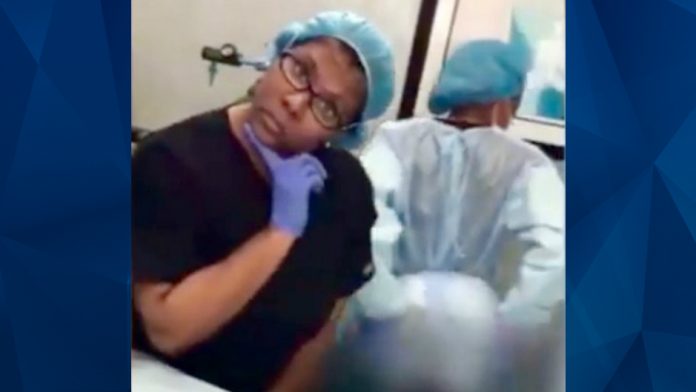 A new audio recording has surfaced of Dr. Windell Boutte, the dancing doctor who botched plastic surgeries, lashing out at the white doctors responsible for suspending her license.

Boutte came under fire after Atlanta’s WSBTV did a number of stories from women who had been disfigured by the dermatologist who professed to be a top plastic surgeon. A series of lawsuits followed, including one from the family of a woman who suffered severe brain damage.

Once the WSBTV stories aired, a patient Chavela Hill who paid pre-paid for an upcoming surgery, confronted Boutte about the allegations. And she secretly recorded audio of the conversation.

Boutte blamed the predominately white medical board and claimed she was being racially targeted.

“The board, as you noticed, declined to remark on any of this because you’ve got some white plastic surgeons on the board that have killed people,” said Boutte on the recording.

“Race don’t have nothing to do with how she’s disfiguring women, and how she’s just sitting up here misleading us.”

Chloe Dallaire who represents three former patients of Boutte who in a malpractice suit, said agreed that Boutte lacks empathy for her patients.

“I think Dr. Boutte is a reckless physician who does not have her patients’ best interest in mind,” the attorney said.

On the recording, Boutte went off on Dallaire too saying:

“One of those white lawyers is such a redneck, Chloe Dallaire. They’re buddy-buddy with the white plastic surgeons on the boards,” Boutte said on the recording.

Boutte has since defended herself, saying that no patients have asked to cancel their surgeries.