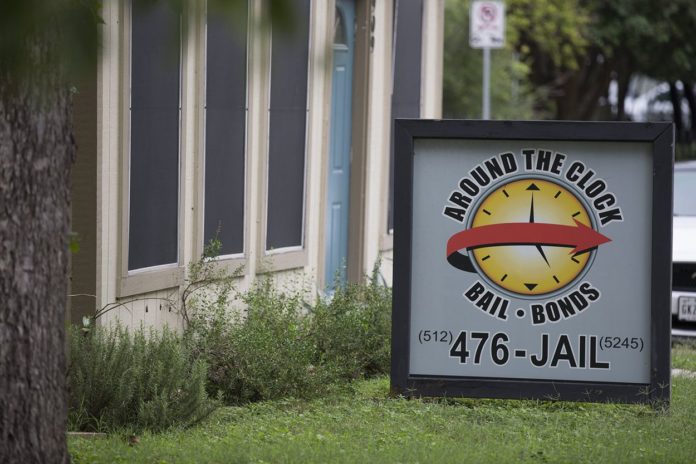 The next chapter in Harris County’s saga over bail practices is set to play out in federal court Tuesday morning, and officials involved in pretrial processes throughout Texas are holding their breath.

The state’s most populous county is involved in a complicated fight over how its bail procedures impact poor misdemeanor defendants awaiting trial. A federal lawsuit questions the constitutionality of the county’s pretrial system, where arrestees who can’t afford their bail bonds regularly sit in jail — often until their cases are resolved days or weeks later — while similar defendants who have cash are released.

Bail is a legal mechanism to ensure defendants appear in court for their hearings. The most common practice is secured money bail, where judicial officers set a bond amount that must be paid by defendants in order to be released. The bond can either be paid to the court in full and then refunded after all court appearances are made, or, more commonly, paid through a bond company that charges a nonrefundable percentage — usually around 10 percent — but will front the total cost.

Last year, inmates filed suit against Harris County, saying they were wrongfully detained in jail simply because they were too poor to pay their bail bonds. The lawsuit covers all indigent defendants arrested on misdemeanors, like driving with an invalid license or shoplifting.

In April, U.S. District Judge Lee Rosenthal issued a groundbreaking ruling, calling Harris County’s bail practices unconstitutional and ordering the release of almost all misdemeanor defendants from jail within 24 hours of arrest, regardless of their ability to pay the bond amount. The county, which has implemented many of its own reforms since the suit’s filing, has appealed the injunction at the U.S. 5th Circuit Court of Appeals, where oral arguments will be heard in New Orleans on Tuesday.

“At a minimum, the litigation in Harris County is going to change the dialogue, if not the policy, of all other Texas counties on [personal] bonds.”

The ruling came down while the Texas Legislature worked — and ultimately failed — to pass bipartisan statewide reform for pretrial release practices. Some cities and states across the country have reformed their bail programs, either on their own or after court rulings, to move away from money bail bonds and release more defendants on personal recognizance bonds, where inmates are released with no money due up front.

These reforms have taken place in jurisdictions that, like Harris County, routinely used money bail as “de facto detention orders against those financially unable to pay,” Rosenthal wrote in her ruling.

Both sides of the lawsuit recognize the legal outcome in Harris County could have nationwide repercussions for the American bail system. In Texas, counties with wide variations of pretrial practices are measuring their programs against the federal injunction.

“At a minimum, the litigation in Harris County is going to change the dialogue, if not the policy, of all other Texas counties on [personal] bonds,” said Michael Young, Bexar County’s chief public defender.

A question of due process

Jail population reports show that almost 75 percent of people in Texas jails have not been convicted. Bipartisan efforts to lower the rising number of poor defendants stuck in jail was a main topic of Texas Supreme Court Chief Justice Nathan Hecht’s address to the Legislature in February.

“Many who are arrested cannot afford a bail bond and remain in jail awaiting a hearing,” he said. “Though presumed innocent, they lose their jobs and families, and are more likely to reoffend.”

Hecht spoke as Harris County, the third largest in the nation, was embroiled in a lawsuit where a judge has now said it uses bail bonds to detain poor defendants without necessary due process safeguards. Under state and federal law, indigent misdemeanor arrestees can be detained on money bail “only in the narrowest of cases, and only when, in those cases, due process safeguards the rights of the indigent accused,” Rosenthal wrote.

“Many who are arrested cannot afford a bail bond and remain in jail awaiting a hearing. Though presumed innocent, they lose their jobs and families, and are more likely to reoffend.”

Before the court order, 40 percent of Harris County misdemeanor defendants remained in jail until their case was resolved, according to data from 2014 to 2016. The large majority of those people — 84 percent in 2015 and 2016 — pleaded guilty at the first opportunity and were usually released within a day based on time served, according to Rosenthal’s ruling. Just less than half of defendants who were released on bond pleaded guilty during the same time. New numbers since the ruling were not yet available.

The county argues that its practices are constitutional because, under state law, a defendant’s ability to pay is only one of five factors to be considered when setting bail. Other things the county must consider are the nature of the crime and public safety.

“This newly-minted constitutional right to affordable bail applies to every misdemeanor arrestee, with minor exceptions, no matter how great their flight risk or how grave a danger they pose to the community or their victims,” wrote Charles Cooper in the county judges’ brief to the appellate court.

Rosenthal countered that argument by pointing out that even after county officials recommend release on personal bonds for misdemeanor defendants, based on their risk level of reoffending or skipping court dates, judicial officers usually ignore the recommendation and stick to a pre-set bail schedule.

Multiple complexities have entangled the lawsuit. The county sheriff — a defendant in the lawsuit — was ousted in the last election and replaced by a successor largely in support of bail reform. And the county has implemented reforms of its own, including a new tool that will quickly identify low-risk defendants and recommend them for release on personal bonds, regardless of income.

Though Rosenthal applauded the county for its reform efforts (which were not yet implemented at the time of the ruling), she has said the problem of unequal treatment for poor defendants would still exist. Lack of money would still be an issue for moderate and high-risk defendants, and officials would still have discretion to ignore the recommendation of release on personal bond for low-risk people, she said.

Her orders went into effect in June, and hundreds of defendants were released from the Harris County Jail. The county’s reforms took place at the end of July, and officials could not yet give specifics on results.

“This newly-minted constitutional right to affordable bail applies to every misdemeanor arrestee, with minor exceptions, no matter how great their flight risk or how grave a danger they pose to the community or their victims.”

County attorneys and the bail bond commercial industry say the order goes too far, and they are asking the federal appellate court to toss out the injunction and the case overall. They argue that the issue isn’t one for federal courts and that the lawsuit is an attempt to get rid of money bail altogether.

“Defendants who cannot post bail are not detained because they are poor,” wrote attorney Paul Clement in a court brief filed by local, state and national bail bonds groups. “Instead, they are detained because the government had probable cause to arrest and charge them with crimes, and wishes to secure their appearance at trial and protect the community.”

Harris County is not unique in its imposition of bail bonds on poor defendants.

Pretrial practices vary widely by county, but almost all in Texas rely primarily on money bail to release defendants, according to a study from Texas A&M University’s Public Policy Research Institute. Harris County is one of the few that uses a validated risk-assessment tool to determine whether defendants should be released without paying.

Texas’ proposed legislation this year, which passed out of the Senate but died before being brought to the full House for consideration, would have required counties to use a risk-based tool to determine bond.

“The basic underlying system in a lot of the other larger counties have the same fundamental flaws that Harris County does,” said Jay Jenkins, the Harris County project attorney for the Texas Criminal Justice Coalition. “If you’re using money bail for misdemeanor cases, and you’re not explicitly having a determination of whether or not a defendant can make a particular amount, those counties are going to be susceptible to litigation after this ruling.”

Changes have already started. Dallas County authorized the creation of a pretrial division and risk-based bail system this year, and Bexar County judges changed their practices to make all defendants eligible for a personal bond assessment, according to Young.

But most Texas counties don’t have programs to monitor defendants released on bond, according to the Texas A&M study, and others, like Tarrant, are watching and waiting.

“My county is aware of what’s going on with Harris County,” said Michelle Brown, pretrial services director in Tarrant County, which primarily uses money bail. “We’re talking about implementing a risk assessment at the county, but we’re still in the talking stages. Unfortunately, we don’t make policy, our judges and county commissioners do.”