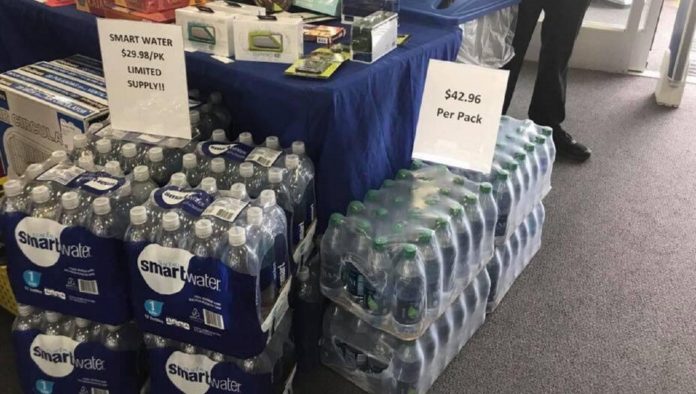 The state alleges Robstown Enterprises, Inc., doing business as Best Western Plus Tropic Inn, charged almost three times its normal room rate the weekend Harvey hit. The hotel is located about 20 miles inland from Corpus Christi. The average price for a queen or king room was $108 per night on the two weekends prior to Hurricane Harvey making landfall, according to the state’s complaint.

After a state disaster has been declared, as Governor Greg Abbott did on Aug. 23, Texas law prohibits selling essentials such as fuel, food, medicine and other necessities at an “exorbitant or excessive price.” It also applies to services like towing and lodging.

On Aug. 26, the Best Western Plus Tropic Inn charged nearly $290 per night for a room. The state alleges that a guest questioned the charge and recorded a clerk who admitted that $290 was not the normal charge but said other guests were being charged the same rate. Another employee allegedly said the high rate was due to “the weather.”

A spokeswoman with Best Western said it has severed its relationship with Robstown Enterprises.

“Best Western was founded on the principles of honesty, integrity, compassion, and service. We were deeply offended and saddened by the actions of this hotel,” said Courtney McCurry, the spokeswoman. “This hotel’s actions are contrary to the values of Best Western. We did not and do not tolerate this type of egregious and unethical behavior.”

Robstown Enterprises did not respond to a request for comment.

The Bains Brothers allegedly charged $6.99 a gallon for regular unleaded gas on Aug. 31 at two of its gas stations near Dallas. The state alleges that in some cases the clerk refused to give customers receipts. One customer began fueling her car when she discovered that 12 gallons of gas cost her $85. After requesting a refund, the state alleges the clerk told her, “it is what it is.”

Bains Brothers and Encinal Fuel Stop did not respond to a request for comment.

Paxton said his office will continue to aggressively investigate and prosecute cases arising from Hurricane Harvey.

“It’s unconscionable that any business would take advantage of Texans at their most vulnerable – those who are displaced from their homes, have limited resources, and are in desperate need of fuel, shelter and the basic necessities of life,” Paxton said in a written statement.

To report fraud or price gouging, consumers can call the attorney general’s Consumer Protection Hotline at (800) 621-0508, email consumeremergency@oag.texas.gov, or file a complaint online at https://www.texasattorneygeneral.gov/cpd/file-a-consumer-complaint.