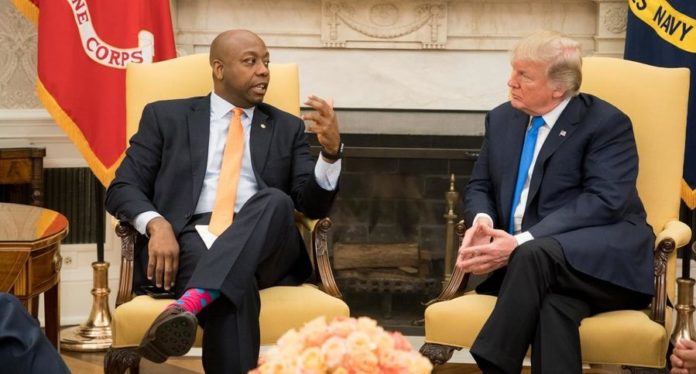 Sometimes mistaking or mistyping someone’s name is simply a mistake. Sometimes it is a “Freudian” slip. Sometimes it simply doesn’t matter.

In the most recent example of a long litany of unforced errors, the White House mistakenly referred to Senator Tim Scott as “Tom” Scott in the widely released photo taken during the meeting.

Some folks would snicker and side-eyeSenator Scott for meeting with President Trump at all. It is laughable that a POTUS would need a history lesson on race in order to distinguish the KKK and neo-nazis from protesters who believe in the cornerstones of the American political project.

But the fact that Senator Scott was “mistakenly” called “Tom” does not bode well for this administration’s anemic attempts to reset after the disastrous response to Charlottesville, the firing of an unrelenting Steve Bannon, Stephen Miller’s reported ascension in the west wing and the unfortunate pardon of Sheriff Joe Arpaio.

The stench of white supremacy still clings hotly to the Trump administration.

Senator Tim Scott’s recent meeting with President Trump has been long on coverage but short on specific details related to what – if any impact the lone black republican senator’s “history lesson” will have on this administration. What impact can this meeting have on a POTUS who is still being dogged by his affinity for white supremacists and his administration’s penchant for pushing racist policies – Muslim bans, border walls, police reform rollbacks, etc.?

As Ta-Nehisi Coates has so eloquently argued; as Jemele Hill as so powerfully stated; President Trump’s ideology is white supremacy.

We can be sure that a 40-minute meeting with Senator Scott cannot erase years of Trump’s race baiting and racial dog-whistling. Moreover, the bar for “success” seems pitiably low: the Senator was pleased that he at least held the President’s attention and that the President was able to stay focused on “race” for most if not the entire duration of the meeting.

This doesn’t appear to be a victory for American race relations.

That such a resolution is somehow “timely” in 2017 is a troll-ish sign of our morally bankrupt, racially regressive political moment. The suggestion that our president might have to be persuaded to sign it once again reminds us that the real identity politics in America are white identity politics. Make no mistake about it.

In this sense, the unfortunate misnomer in the original release of the photo documenting Senator Scott’s meeting with the president reflects the pervasive ways in which various cases of mistaken identities now plague our political systems.

But mistaken identity placed in its proper historical and cultural contexts can make a big difference in our perception of a political moment. For this moment and for this administration, the problems of our nation’s original sins – the white supremacist underpinnings of manifest destiny and institutional slavery – continue to be identified with the political era of Trump.