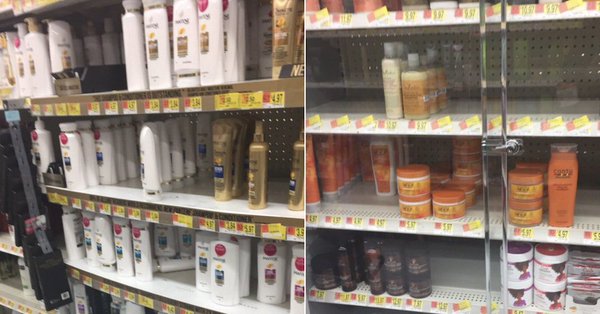 Black woman filed a discrimination lawsuit against Walmart on Friday because some stores keep Black beauty products in a locked case, while beauty products marketed to other ethnic groups are not locked, Newsweek reported. The retail giant denied that it practices racial discrimination, but this sure looks like another case of shopping while Black.

“It perpetuates a racial stereotype that African Americans are thieves,” said Gloria Allred, the women’s rights lawyer who filed the case for Essie Grundy.

After unlocking the case and taking out the products, a Perris, California Walmart employee told Grundy that she must be “escorted” to the cash register to pay for them. The products included lotion and an inexpensive comb. That employee said that segregating the product was a policy from Walmart headquarters. Other nearby Walmart stores had similar policies, some went so far as to have surveillance cameras overlooking cosmetics for Black women.

Walmart issued a statement claiming that it does not discriminate against shoppers. “We’re sensitive to this situation and also understand, like other retailers, that some products such as electronics, automotive, cosmetics and other personal care products are subject to additional security,” the company said. Walmart uses data to determine when extra security is needed for specific products at individual stores.

The disrespect in this case is really no different than when a security guard keeps an eye on Black shoppers to see if they’re slipping store items in their pockets. Those who have never experienced that humiliation typically dismiss the practice as a minor inconvenience that’s necessary for security. But singling out a race of people and segregating their products is more than an inconvenience.

Walmart is far from alone. Other retailers are guilty of keeping products marketed to Black folks under lock and key or directing security to keep an eye on Black customers. In another case, store detectives sued a New York CVS for ordering them to watch Black customers. Barneys New York and Macy’s are just a few of the other major retailers that received backlash for this type of discrimination.